MERRY OAKS — Just off Old U.S. 1 sits a pristine white church, the grass outside always freshly cut. Inside are bright red pews and marbled windows with swirls of pink, purple and blue; four golden light fixtures hang — one from each corner of the ceiling.

It’s not the biggest church in Chatham County by any stretch, but it has some of the richest history.

Earlier this month, we ventured to Merry Oaks Baptist Church for the congregation’s annual homecoming ceremony. Visiting pastors traveled to Merry Oaks for the occasion, and families of congregation members drove in from out of state to attend the service, which was followed by a Sunday afternoon potluck with all the homemade fixin’s.

This year’s celebration, however, had a unique aura to it. One of hope, nostalgia and fear of the unknown future.

Merry Oaks Baptist Church has stood tall near Pea Ridge Road since 1888. It’s seen generations of family members come and go over the years. Many of the families still attending services have ties dating back centuries.

Now, however, that communal history is under threat. Recent plans from the N.C. Department of Transportation show roadways leading to the new VinFast facility at Triangle Innovation Point in Moncure will pass through Merry Oaks.

The current plans from NCDOT show the roadways will displace 27 homes, five businesses and one historic church: Merry Oaks Baptist.

Plans for the roadways have not been finalized by NCDOT. Updated designs may be available by December or January, and the project team is still in the process of addressing public comments, according to NCDOT Communications Officer Harris Kay.

While members of the congregation are frustrated and upset at the current NCDOT plans, they also believe the future of the church is in God’s hands. In nearly a century and a half, the tall white steeple atop Merry Oaks Baptist has been no stranger to trying times.

The NCDOT plans only the latest to come its way.

Still, the uncertainty of Merry Oaks Baptist’s future has rallied congregation members and their families, some of whom spent years away from the sanctuary until the homecoming celebration this past month. One congregation member has started a Facebook page called “Save Historic NC Church,” which features photos from 50-year-old Easter egg hunts, weddings from the early 1900s and old photographs of some of the congregation members who still attend services there.

The red pews hold more memories than the aging minds of its members can recall. It holds the beginnings of awkward relationships that later became marriages, the echoes of old choir practices and maybe even the hidden crumbs of cookies made by the preacher’s wife every Sunday.

Beyond the walls of the sanctuary, the church is an important symbol because it is the last remaining pillar of the community that once was the town of Merry Oaks.

The community is all too familiar with the casualties of development. The town was once touted as the next big thing in the state — it had a massive dance hall that drew commuters from Raleigh; it was home of the first ever school in the county opened in 1906, and dozens of families lived in rental housing along what is now Old U.S. 1. All of that is now gone. As the Raleigh News & Observer said in an article from 1966, “Merry Oaks is a town that was.” 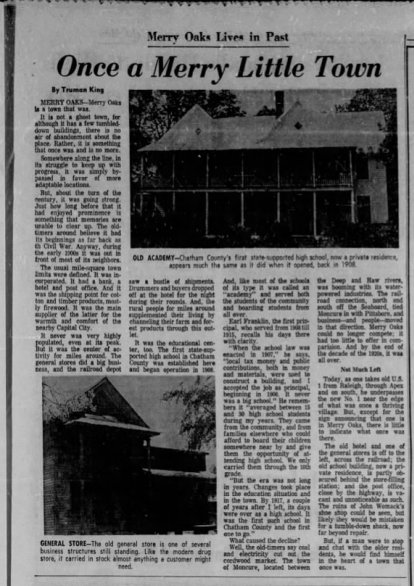 A newspaper article in the Raleigh News & Observer from 1966 calls Merry Oaks "the town that was."

And it remains that way today — an afterthought in the pursuit of industrial progress for the Triangle. “Somewhere along the line, in its struggle to keep up with the progress, it was simply bypassed in favor of more adaptable locations,” the 56-year-old story reads.

Roadways built to Raleigh, Durham and Chapel Hill cut up the town and took families with it. Then the railway connection between Moncure and Pittsboro moved more people closer to town until Merry Oaks could no longer compete.

The underserved rural town is a victim of the movement toward suburbanization and manufacturing that have plagued small town USA for the last 80 plus years.

Make no mistake though: there are still folks with memories of Merry Oaks fighting to keep its last legacy alive through that church.

We saw how important that church was to the people still in Merry Oaks when we attended their homecoming services and the heartbreak that would come if VinFast and NCDOT were to fell Merry Oaks’ final pillar.

What the NCDOT plans miss is that removing homes, businesses and churches like Merry Oaks cannot remove the history of the town and the livelihoods of the people who have made it their home.

Members told us whether there is the physical building off Old U.S. 1 or not, there will still be a Merry Oaks Baptist Church — because it is the people that make the church, not the building.

Over the next few months, we hope to tell the history that remains in Merry Oaks and its importance to Chatham County through a series of reported stories, oral histories and photo portraits that capture the heart of Merry Oaks — a community that still is.

Ben Rappaport is the CN+R’s education reporter he can be reached at brappaport@chathamnr.com; Anna Connors is a CN+R contributing photographer.