‘Thank you’ school board, parents say at final meeting before election

PITTSBORO — Dozens of Chatham residents filled the front rows at Monday’s Chatham County Board of Education meeting, providing a show of support for the school board less than a month before a contentious school board election.

The appreciation came after the board’s meeting a month ago that included attacks and criticism from speakers during the public comment segment of the meeting, when some claimed falsely the board promoted critical race theory (CRT) in schools and others, including speakers from outside the county, invoke their faith to call out the board for “bullying” students.

During Monday’s meeting, nine of the 10 community members, mostly parents, who spoke during public comment period expressed appreciation for the school board and called out problematic rhetoric that had spread online about CRT in Chatham County Schools.

Board members Del Turner (Dist. 3), Jane Allen Wilson (Dist. 4) and Gary Leonard (Dist. 5) are seeking re-election in November are up for election in November. Turner’s and Leonard’s opponents — Jessica Winger (Dist. 3) and Timothy Moore (Dist. 5); Wilson doesn’t face opposition in the Nov. 8 election — have raised concerns or promoted claims that CRT is being taught in CCS and called on the board for further parent involvement in classroom instruction.

D’Amato called some of the language at last month’s meeting harmful, especially to members of the LGBTQ+ community. Her religious allusion was made in reference to three pastors who spoke at last month’s meeting, one of whom called transgenderism part of several “tragic ideologies.” D’Amato said these attacks on queer students don’t move the district forward.

Other parents praised the progress of the school board despite a tumultuous term over the past two years with COVID-19. Several said they believed the current board was the best they had ever experienced in Chatham County Schools. Each of the nine parents filled their three minutes with endless “thank yous” and called out the progress of the district and growth in testing scores.

Some who spoke said the use of buzzwords like “liberty” and “freedom” were antithetical to the language expressed at last month’s meeting.

“I am here to voice my opposition to the ‘parents first’ movement currently making noise within our community,” said Krista Millard, CCS parent. “I believe in One Chatham for all students. Putting parents first will not help our students succeed, it only adds noise to the work of the current board.”

Millard and others have been critical in letters to editors in the News + Record and other publications about groups, like Moms for Liberty, which used “parents first” language to promote its agenda. The national organization of MFL, which has a chapter in Chatham County, has called for book banning in schools, falsely used CRT as a catch-all for race-related school issues and openly attacked LGBTQ+ students. Parents who praised the school board said allowing this kind of rhetoric in CCS is regressive and won’t help students succeed.

“What will help our students to succeed is focusing on giving our students the resources they need to graduate,” Millard said. She named programs like AVID, reading comprehension and supporting teacher retention as things the current board has done to help students.

CCS parent Brooke Davis also spoke in support of the board, saying she was proud of the thriving diversity in the district. She, too, said she believed claims of CRT in CCS only threaten that diversity.

“Growth and diversity are not only on the rise, they are who we already are,” Davis said. “Educational opportunity for all students is not beholden to one narrative. Rather, they are a diverse collective of authentic and balanced viewpoints”

Davis said there is expected to be an influx of more than 3,000 students in the county over the next 10 years, and that more than half of current children in the country are people of color. She cited her own faith as a reason to embrace diversity in the district, instead of attacking it with false claims about CRT.

Per board policy, the board was not allowed to respond to any public comments made during the meeting.

• Newly appointed school board member Julie Bridenstine was officially sworn in following her selection last Thursday. She replaces Melissa Hlavac, who resigned last month. Bridenstine is a former public defender and guardian ad litem who hopes to reduce the school to prison pipeline in CCS. 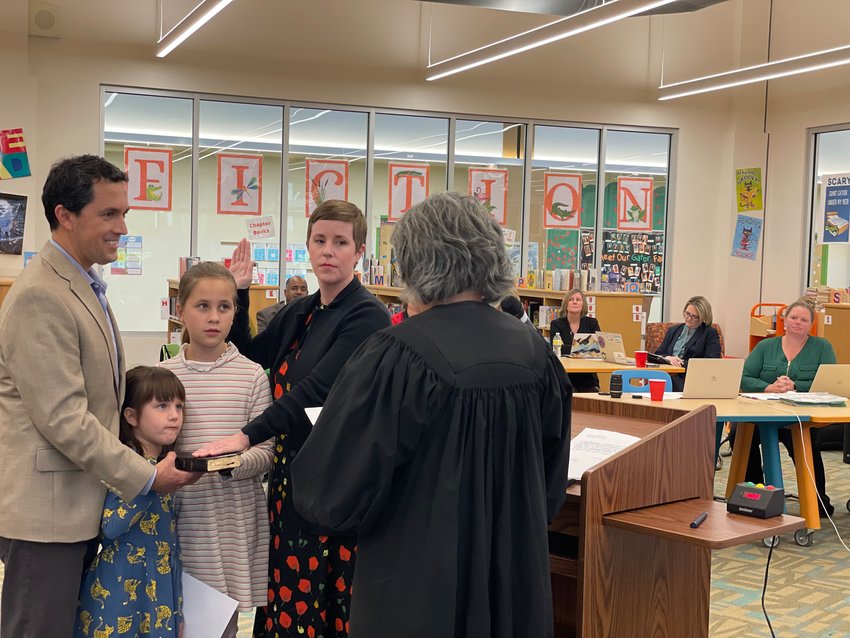 Julie Bridenstine was sworn in by a judge as the new member of the Chatham Board of Education on Monday night.

• The board honored Elliot Peterson, music education teacher at Jordan-Matthews High School, as the beginning teacher of the year for the 2021-2022 school year. He will go on to a national competition of beginning teachers later this year.

• The board also heard a presentation about a new non-traditional academy, Chatham One Academy. This would replace the former Sage Academy, which served the same purpose — a remedial option for high school students who needed special attention to receive their diploma. Superintendent Dr. Anthony Jackson said students could either be assigned or choose to attend the academy. The goal is to start it next semester, beginning January 2023. The goal would be to have 20 students in the first cohort. At Sage Academy the largest class was around 30 students, and had a consistent graduation rate of 95%. The first year cost would be approximately $400,000 for four core teachers and a program coordinator. Additional cost would be $25,000 for startup expenses and training.

• The board also unanimously approved school improvement plans for all 19 Chatham County Schools. The plans will be made available on each school’s website through the “About Us” pages.

Four schools in CCS have been designated as low performing under the definition from the North Carolina Dept. of Public Instruction — Chatham Middle, Siler City Elementary, Bonlee, and Jordan-Matthews High. These schools developed a school recovery support plan, which were approved Monday. Public feedback on these support plans is welcomed and can be reached at bit.ly/3COWYZ1.

• CCS’ Capital Improvement Plans for 2024-2030 were also approved. Projects with estimated costs upward of $100,000 need to be included in the plans. The district added four new projects to the plan. Those include HVAC upgrades at existing middle schools, building a new Southern Village Elementary School in Chatham Park, increasing capacity possibilities at Moncure School and improving gymnasiums at Bennett, Bonlee, and Silk Hope. All listed projects are expected to be completed in 2028.

The next Chatham Board of Education meeting is currently scheduled for Monday, Nov. 7, at the George Moses Horton Middle School multipurpose room. For more information visit www.chatham.k12.nc.us.