PITTSBORO — Squaring up the white cue ball on the pool table at the Sycamore at Chatham Mills, Jay Niver hunches over and — eye level with the ball — pulls back his brown wooden pool cue. Then, in rapid succession he moves it back and forth toward the cue ball, as if winding up. Once, twice, three times, then four: his target makes loud contact with the red 3 ball, sinking it into the corner pocket.

As the ball clunks into the leather netting, onlookers cheer and say “nice shot” in what’s become a weekly scene near downtown Pittsboro.

Niver is the founder and president of the Pittsboro Pool League. The group plays weekly games at the Sycamore or at one of the member’s homes. Numbering around 30, the league has continued to grow since its inception in March 2019. 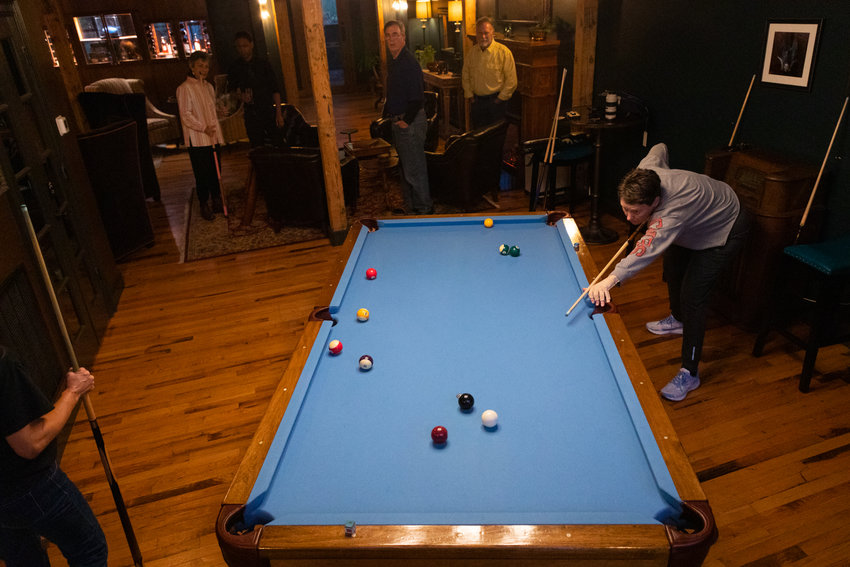 Debbie Shipley, member of the Pittsboro Pool League, lines up a shot during a match against Michelle Warrene at The Sycamore at Chatham Mills on …

The skill level of the players ranges from amateur to former professionals, which according to Niver is part of the community the league has created.

“I discovered there were people like me who just like to play,” Niver said. “The beauty of it is there are good losers here; so I’d say it’s really 75% fun and 25% competition.”

Living in Canada, Niver said it was common to go out to bars and have everyone be part of a pool league. He wanted to bring that same spirit to Chatham County when he moved back.

“I grew up with a table in the basement,” Niver said. “Anytime anyone came over in high school or whenever we just played. But when I joined a league that’s when I really learned what to do and really fell in love with it.”

He said the only public table in town was at the former Pittsboro Roadhouse, owned by Greg Lewis — who now also owns The Sycamore.

“I introduced myself to Greg and asked if he would be interested if we could play there if I got a group together, “ Niver said. “He was very supportive and said we could play for free.”

After some posts on social media, flyers around the Roadhouse and email blasts to neighbors, Niver had the league racked and ready to go. 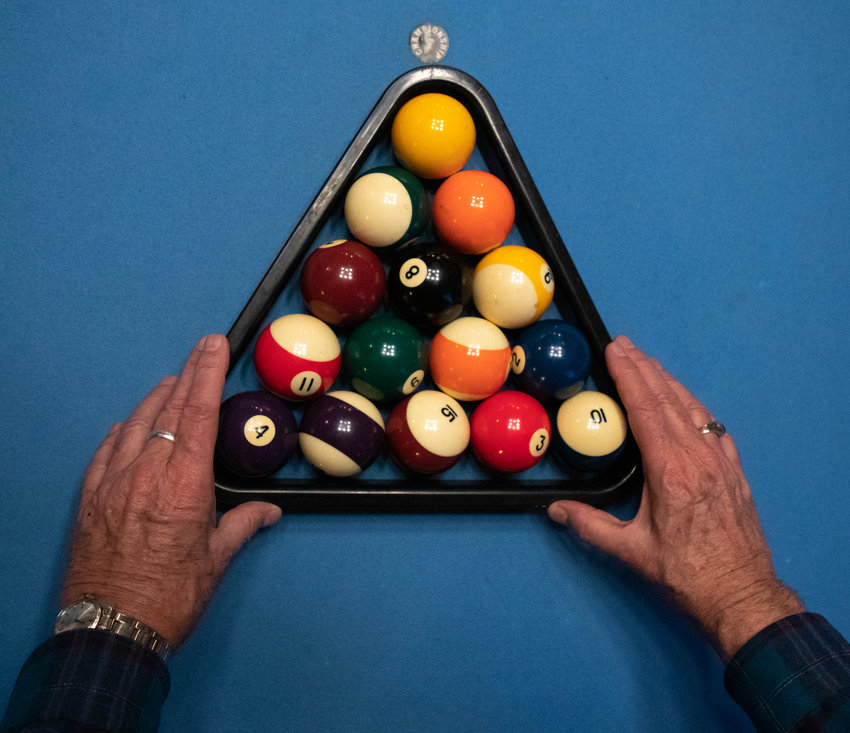 Jimmie Vaughn, member of the Pittsboro Pool League, arranges the balls in preparation for a pool match against Antonio Sloan at The Sycamore at …

One of the early members was another frequenter of the Roadhouse, Jimmie Vaughn. He bought a used pool table online and donated it to the Roadhouse so the league could grow even further. With two tables in one spot, members of the Pittsboro Pool League could play games simultaneously. From those two tables came more players and more competition.

While Pittsboro Roadhouse shuttered its doors during COVID-19, PPL lives on in its new home. Last season, the league played 12 weeks with four teams of six to seven players each. The league also holds open tournaments with small cash prizes.

“At first I was skeptical of it, but my dad dragged me out to the Roadhouse for an open 8-ball tournament,” said Antonio Sloan.

At 25, Sloan has been nicknamed the Smokin’ Tony — he’s the youngest player in the league but the most calculated and competitive. He can play with the big boys and frequently wins tournaments in PPL. 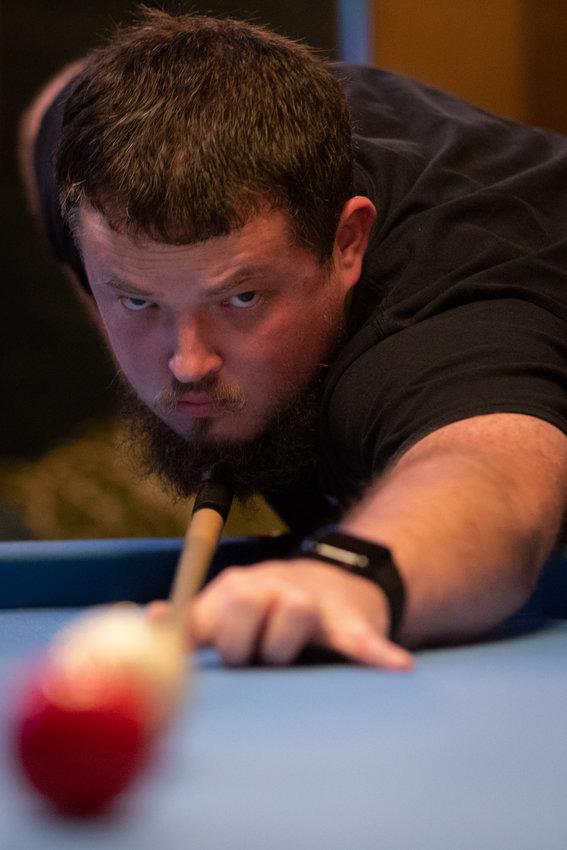 Antonio Sloan, member of the Pittsboro Pool League, eyes his shot during a pool match against Bruce Lively at The Sycamore at Chatham Mills in …

“I remember Antonio and his dad pulling up to this tournament and we thought surely one of our members would win it,” Niver, also referred to as Weasel, said. “But next thing we knew, he and his dad were taking out our best players and walking away with the money so we said, ‘We gotta get this kid to join us.’”

Sloan said he likes to test himself and see how good he can get, but the most fun part of the game is learning its intricacies. He said being part of the PPL with players who are more experienced helps him learn those nuances on a higher level.

“I played competitively for nine years and that was probably the best I’ve ever been,” Sloan said. “But I don’t think I’ve ever had more fun playing than I have in this league right now.”

Other members, like the Bear — a.k.a Bruce Hively — have trickled in along the way and made the league what it is today, and it hopes to expand even further in the near future.

“The competition here is increasing every year,” Hively said. “There’s opportunities for everyone to grow their game here. It’s just a good group of folks who know and enjoy this game.”

Niver also keeps the stat sheet every week for the league. He knows which players have the highest shooting percentages, which teams are projected to win and the standings of each team. Last season Vaughn’s team, which Sloan was also on, won the league and they’re looking to repeat their success this winter.

The stats and standings get sent out in the weekly PPL newsletter entitled “Breaking balls and enjoying racks.” While politically off-color, it’s part of the laxed and fraternal energy of the group.

“The great thing about this league, though, is that nobody — with the exception of a few — gets too upset whenever they lose,” Niver said. “We just have fun. The reality is some of us are straight up not very good at all. You don’t have to be good to join our league.” 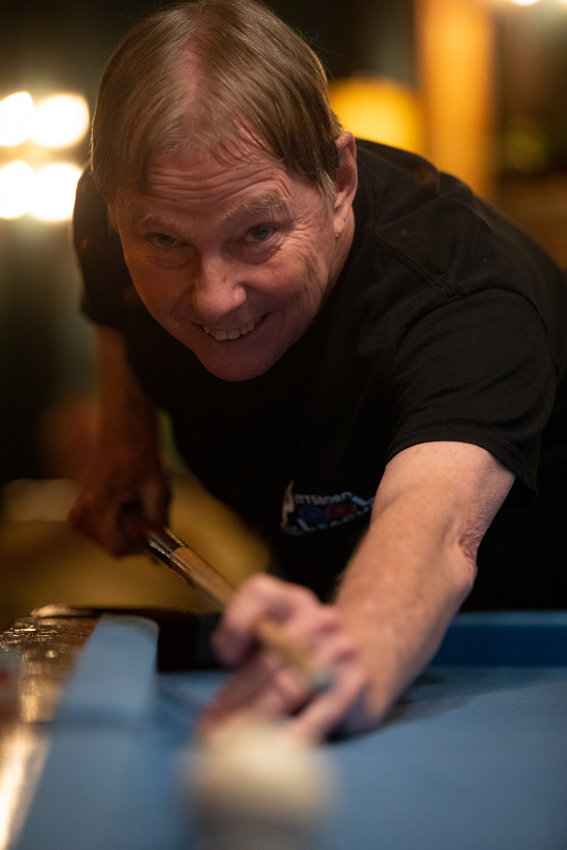 Jay Niver, founder of the Pittsboro Pool League, shoots the ball during a match at The Sycamore at Chatham Mills on Wednesday, Nov. 2, 2022. Niver …

There’s joy in the league outside of the 16 balls on the table, Niver said. Often the best part in his mind is sitting around and watching others play as you sip a beer and shoot the breeze with people who quickly become close friends.

Watching the PPL shoot at the Sycamore, you’ll find members congregating around the table as two people play — commentating on the next move, “ooing” and “awwing” at the angles of the cue ball and taking notes on certain billard strategies. Nerdy, maybe, but it’s also a unique community in Pittsboro that has made itself a weekly home.

At its season orientation at the beginning of November, that sense of community was especially evident. Niver went around the room with each member trying to map out logistics for the upcoming season, listening to each player’s schedule trying to find days when the league could play together.

That’s what PPL is about: leaving nobody out and making sure every player, regardless of skill, feels included.