Results from Tuesday’s mid-term elections came in after press time for this edition. Find out who won and read our full coverage for free at www.chathamnewsrecord.com/elections. We will also post results in our Chatham Brew newsletters and on our Twitter, Facebook and Instagram pages. Look for a full elections recap and more stories in next week’s edition.

Voters across Chatham made their way to the polls Tuesday for the 2022 Midterm Election, animated by a plethora of issues including reproductive rights, education and the fate of democracy in the country.

The enthusiasm of Chatham voters was felt before Election Day even began. The county had the highest early voter turnout in the state at 47.5%, representing more than 28,000 ballots cast. 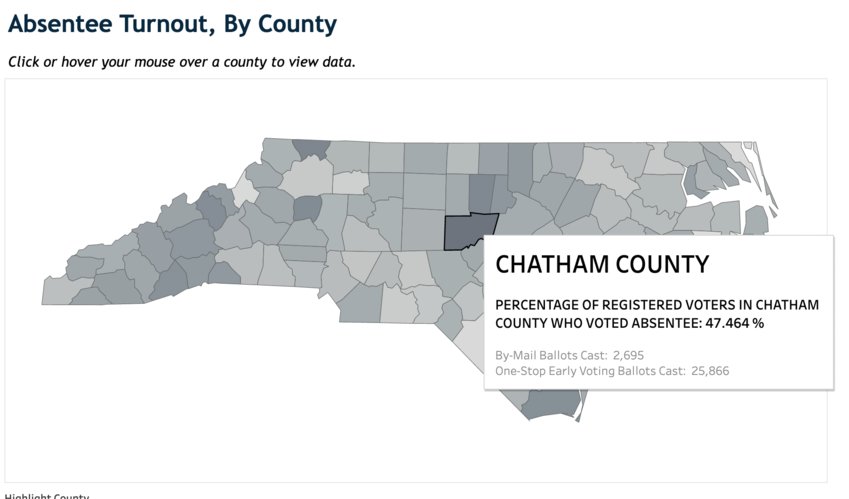 Chatham County led the state in early voter turnout at 47.5%, accounting for more than 28,000 ballots cast.

On Tuesday, county voters seemed to bring the same energy to Election Day. Lines at the Chatham County Agriculture & Conference Center stretched into the parking lot Tuesday morning as tents with candidates and political party booths lined the walkway.

Matheny, a Republican, said he cares about ensuring his party is elected into office, especially in offices like the Senate seat contested between Ted Budd, a Republican, and Democrat Cheri Beasley.

Turner said the support she’s received has been “overwhelming,” and that she was optimistic heading into Election Day. Along with other Democratic candidates, Turner planned to attend the election night watch party hosted by the county’s Democratic Party Tuesday evening.

“I’m just really grateful to see how much people care about their children because they’re on the ballot,” she said. “Not me, not Jessica — it’s the children that are on the ballot.”

Her opponent Winger, also present outside the Ag Center, expressed similar sentiments as the election season comes to a close.

Winger, who visited four polling sites before arriving there, planned to stop at precincts across the county throughout the day. She said she was excited to see the number of voters present in Chatham.

“Whatever happens, I’m just praying that we can have peace and we can move forward with whatever the results are, whether it’s in my favor or not,” she said. “We want to move forward on a positive note for our community, for our schools, and so we’ll see.”

N.C. House Minority Leader Robert Reives II was also visiting precincts across Chatham County and speaking to voters and volunteers. He said he’d received positive support from people across the county who are both Democrats and Republicans.

“I’ve been incredibly thankful for the opportunities I’ve had,” said Reives, who faced former Chatham Commissioner Walter Petty in his re-election bid. “I really appreciate this and I hope that that’s the lesson everybody thinks that if we care that we’ll get positive results.”

Krysten Gallihue, 32, is a former educator who said the board of education races were their top priorities in this year’s election.

“As a former educator I know we need someone with experience in education, which is why I trust our incumbents in this race,” Gallihue said. They added Chatham should not accept people who spread lies and misinformation.

Sherry Johnson, 49, also said the school board races were the most important on the ballot because there needs to be a change in Chatham County Schools.

“How we are leading our children in this community is leading to things being allowed that didn’t used to be allowed,” Johnson said. “All my children have gone to school here, but I am looking for a change back to the way things were.”

Johnson said she believes education has lost its discipline and has adopted an “anything goes” mentality.

Not all voters, however, wanted to see change in the county’s political landscape. Linda Rone, 58, said she loves living in Chatham and views her current elected officials as benefitting her community. She said the growth of the county is a great opportunity and she is happy with leaders in the local Democratic party who have welcomed that opportunity.

“Things are getting bigger and better in the community,” Rone said. “I just love what we are doing here in Chatham. I see they are building things, helping the kids, I like that.”

The other issue that brought voters from parties was abortion. Johnson and Gallihue both said it was one of their top priorities in this election.

“Getting our judges and others in place who stand for what I believe in is really important in the topic of abortion,” Johnson said. She said she was strongly against further legalizing abortion.

Gallihue and other left-leaning voters like Katie Cousins, however, said protecting the right to abortion had become more important than ever in this midterm election following the Supreme Court decision to strike down Roe v. Wade.

“As a woman with a daughter, I’m trying to defend my reproductive rights as well as hers,” Cousins, 33, said. “I’m doing everything I can.”

She said the Senate race between Beasley and Budd was the most important race on the ballot to her.

N.C. Democratic Party Chairperson Dr. Bobbie Richardson dropped in on the polling site at the Armory in Siler City. She also spoke on reproductive rights, including access to abortions.

“I think women are the test group for having their rights taken away,” she said. “If they’re successful in taking women’s rights away, then there will be other rights that will be taken, and they’ve told us that.”

Richardson said the main issue on the ballot isn’t just abortion access or other social issues; democracy itself is in peril.

Volunteers with Democracy N.C. also sat nestled between candidate- and party-affiliated booths outside of the Ag Center in Pittsboro. Democracy N.C. is a nonpartisan non-profit organization focused on increasing access to the democratic process in the state, particularly among communities that are historic targets of voter suppression.

Chanae Wilson, one of the volunteers participating through the North Carolina Budget and Tax Center, said organizations across the state were volunteering with Democracy N.C. to monitor sites in case voters experience disruptions or challenges participating in the electoral process. She said the process in Chatham has been relatively smooth, with the exception of one day during early voting in which a man shouted at voters from the parking lot at the Ag Center, but he eventually drove away and did not physically threaten anyone.

Both Wilson and Mel Umbarger, another volunteer, said they felt like the non-partisanship of the organization lends itself well to being able to inspire trust in voters and protect the polls — particularly in an increasingly polarized political environment.

To some voters, the future of democracy was on the ballot in this election. Linda Starkweather, 75, said she was voting to support the institution of democracy.

“I don’t like the fact that people are still challenging the results of the 2020 election,” Starkweather said. “I don’t like the violence or what happened on Jan. 6. I always vote, but this one feels more significant.”