CHAPEL HILL — The recess bell rings at North Chatham Elementary and the 2nd graders in Susana Negroni’s class bolt out the classroom door and onto the playground.

Some gather for a game of tag near the slide and others congregate at the swing set. But for many of the rest, there’s a new favorite activity: gardening.

The North Chatham Elementary Parent Teacher Association opened a community garden on campus, just off Lystra Road, in April. Since it first broke ground, the students and parent volunteers who serve as the garden’s caretakers, tending the flowers and vegetables, have created a special community.

“This activity is really good for the students,” Negroni said as she watches her students learning to plant leeks in the garden. “It’s very nice to show the students they can grow their own plants at home and the parents love to see their kids participate.”

Negroni said helping in the school gardens has become such a popular recess activity that she was forced to create a sign-up sheet for her students each week to ensure everyone in the class gets a chance to participate. 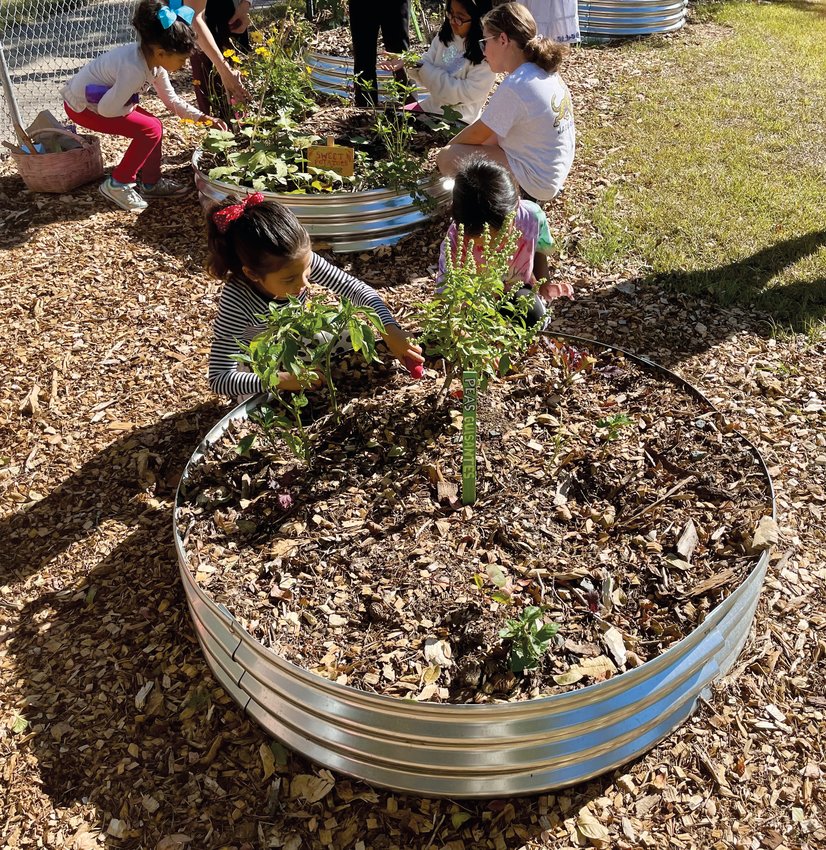 The "gardening gang" at North Chatham Elementary has formed bonds between students regardless of age, gender or language barriers.

The mastermind behind the operation is Marianne Maschal, an NCES parent with a passion for gardening. She’s been at the school nearly every day since the garden broke ground. She said she got the idea for the garden from other elementary schools she had visited and wanted to bring it to NCES for her kids and their friends to enjoy. Maschal also previously worked at Marbles Kids Museum where she taught children to garden, and she has a background in exhibit design.

“The kids were really such a big part of getting this space started,” Maschal said.

Fellow parents and teachers at NCES attest Maschal is quick to deflect praise about the garden toward others. But she was the one who first spoke up at a February PTA meeting and asked for the funding to make the garden happen and beautify the school. To this point, the PTA fundraised about $5,000 for the garden, most of which has been spent on mulching, tractor rentals and purchasing raised soil beds.

Now, the impact of that ask is seen all over campus: colorful flowers line a stone walkway at the entrance to the school, hibiscus flowers cover the outdoor patio area, gourds and peas surround the outskirts of the playground and more flora is still on the way. 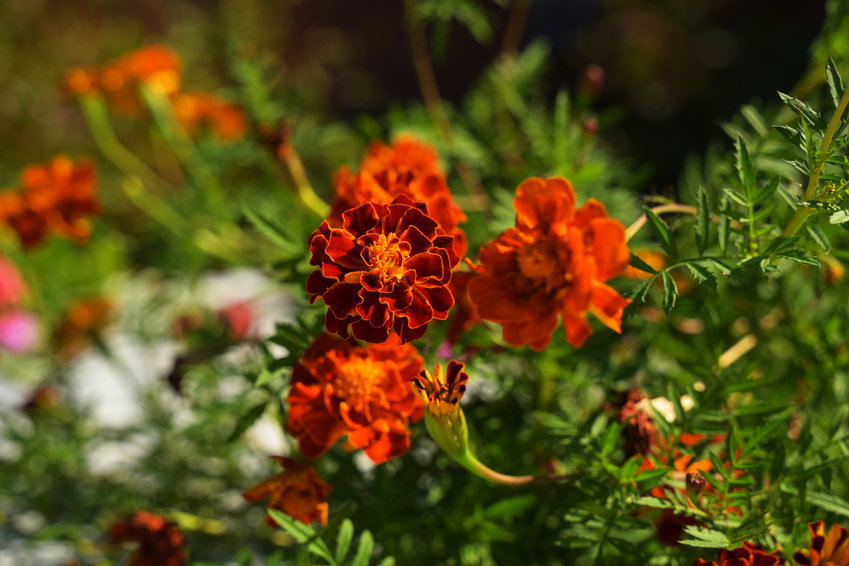 Flowers of all colors line the entrance to North Chatham Elementary School thanks to the garden supported by the PTA.

Many of the seeds, wheelbarrows and other gardening supplies come from Maschal’s personal garden or are bought with funds from her own pocket. What doesn’t come from her directly is donated by other parents for Maschal and the children to plant.

In her eyes, this is a long-term project meant to outlast Maschal’s time as a parent at the school.

“I have two kids here now and a 3-year-old at home,” Maschal said, meaning she is personally committed to the project for the next 10 years. “But I’m in this for the long haul. I want this school garden to outlive the gardener. You need to be able to pass the torch on and build a community.”

Maschal’s ultimate vision is to make NCES into a nature-friendly haven for students to learn about gardening, pick their own flowers and crops and find a deep appreciation for nature.

When Maschal and the PTA first started preparing to make NCES into a blossoming garden, she said the task seemed daunting. Much of the soil was hard clay — making planting difficult — and the plants that were present weren’t well kept.

“With a place like that, that hasn’t been gardened before, you just really have to bring your expectations to scale,” she said.

In these first few months, the focus has been building biomass into the soil. Mascal said many schools are ecologically designed to be as easy to maintain as possible so that a landscaping company can come by a few times a year.

“We are just trying to come in and give everything the attention it needs,” she said.

The attention to the land has now paid off. What was once a marshy picnic area is now flush with morning glory flowers and Jerusalem artichokes. Maschal said with the hardest part out of the way, she and other volunteers can turn their attention to creating an integrated curriculum with the garden.

“As a first-year garden, you have to build the community to sustain it first,” Maschal said. “We want to make these spaces into classrooms of their own and make sure the kids are just as invested as we are.”

Maschal said teachers, like Negroni, and her 2nd graders, have loved having the garden as a space to learn, beautify the school and create fellowship.

Breaking down barriers, one seed at a time

As a dual-language teacher, Negroni said recess gardening also decreases language barriers between students. Often during free time, Negroni says students self-segregate by language and culture. But in the garden, things are different. The parents who volunteer at the garden agree.

Christian Hansen, a parent volunteer, comes to the North Chatham garden three times each week. She said the students who garden have become their own clique at the school.

“It doesn’t matter the age, language, gender, nothing,” Hansen said. “These kids are like a gardening gang — they stick up for one another no matter what and they really formed strong bonds.”

Hansen was born in Puerto Vallarta, Mexico, and her children are being raised bilingual, so she said seeing the cultural barriers come down in the garden is fulfilling to watch. She’s also attempted to foster those multicultural connections herself. Some of the parent volunteers meet once a month with their kids on Saturdays to help in the garden, and Hansen always brings Mexican food made with ingredients grown at NCES.

She’s made carrot cake tamales, sweet bread or hibiscus salsa using spices and flowers found near the picnic area. Hansen said it’s part of making the garden a sensory-rich space for the whole surrounding neighborhood to use and enjoy.

“It’s not just about a garden,” Hansen said. “She is building a community. When you garden, there is no language barrier.”

If you plant it, they will come

With the garden now a staple of NCES, others in the area have taken notice. The school has volunteers from United Way of Chatham County, local church groups and Chatham County high schoolers who are making something special of their old stomping grounds.

But even with the volunteering, Maschal said the bulk of the work has been done by the elementary schoolers at North Chatham. They decided where the raised beds should go on the playground, which flowers should go where and even did most of the planting themselves (with a little help from the parents).

“They love to dig and get dirty,” Maschal said of the students. “And giving them little moments of ownership gives them a chance to be proud of themselves and that they’re helping the school.”

It helps, of course, that Maschal likes to get dirty, too. As she walks through the garden and explains all its unique features, she can’t help but pick a weed, move a gourd out of the mud or reposition a flower to make sure it’s getting proper sunlight.

For now, that’s what the garden is all about — getting dirty, building community and making joy a top priority.

As the garden expands, Maschal is looking at pursuing other grants, including $15,000 through the North Carolina Schools Go Outside Grant to help build a nature trail near the student drop-off area at NCES. 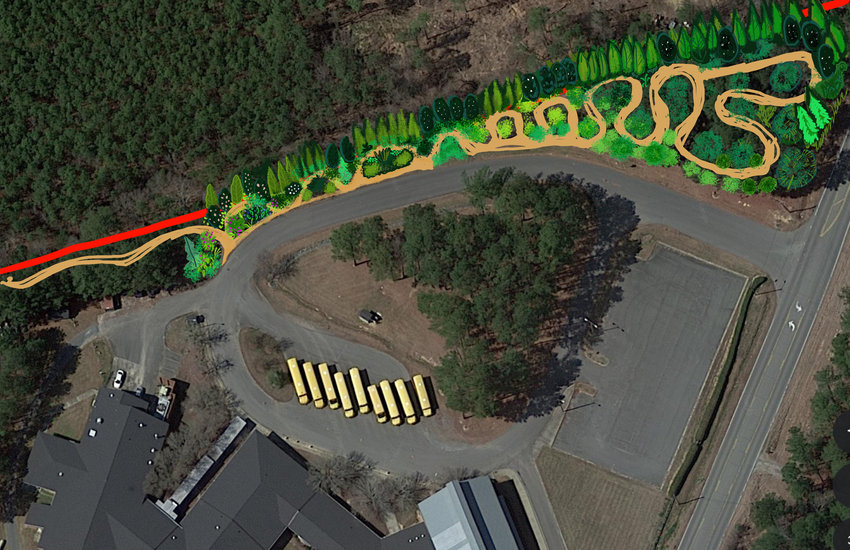 A rough sketch of the nature trail plans Marianne Maschal envisions near the student drop-off at NCES.

The PTA is also hosting a fundraiser to build birdhouses to raise money for the garden and attract birds to the space to create an ecosystem. Maschal and her husband will make by hand the birdhouses to help build the songbird sanctuary at NCES.

For more information about the garden, including how to volunteer, donate to the PTA or provide seeds and plants to the garden, visit Facebook.com/ncesgardenclub or Instagram @ncesgardenclub.