Ghostly train enchants visitors with a ride through wicked woods

BONSAL — Flying monkeys, witches brewing potions and Dracula emerging from his grave are all part of the Track or Treat ride at New Hope Valley’s Halloween Express.

More than a thousand people from across the state ventured to Bonsal for the eight-mile trek into the wicked woods on Saturday. The haunted train was part of an annual tradition for the historic train museum.

As night fell upon the old rail yard, train cars filled with skeletons, singing pumpkins and mummies became illuminated. Families in costumes of all kinds wandered their way toward the creepy caboose. 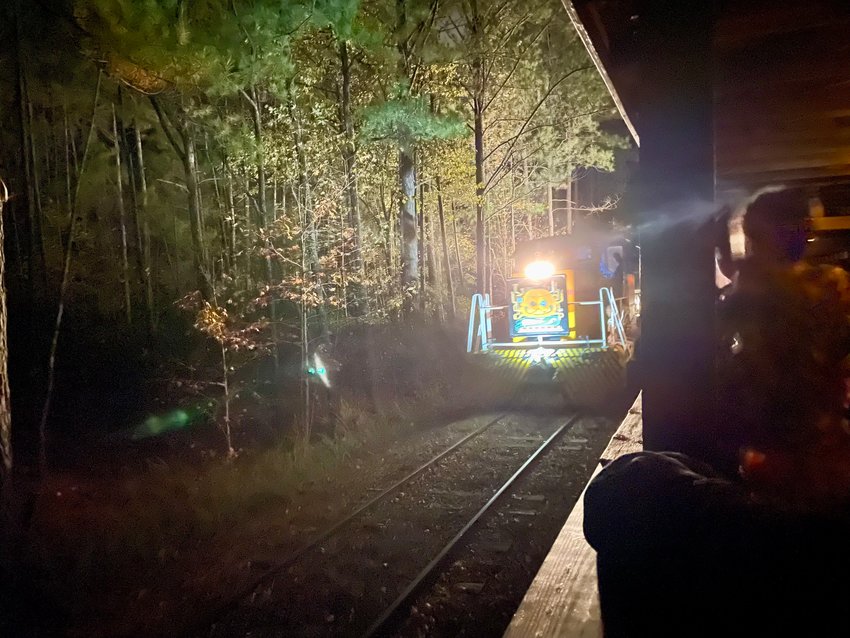 The grand finale of the Halloween Express was the ghost train operated by the headless brakeman. It featured a display of skeletons and mummies as …

Jack Skellington himself stood on the loading platform and gave the final “all aboard,” waved goodbye to the poor souls on the track, and then the train was off into the night. It rushed past giant snakes, aliens and a dragon. The ride concluded with a ghost train operated by a headless brakeman, which mysteriously appeared right next to the haunted rail line.

“It was the best thing ever,” said Athena Sevier, 7, as she jumped up and down from excitement after the ride. “I’m a big fan of Halloween and all spooky things and I definitely want to come back every single day.”

Sevier said her favorite part was when the gravedigger was chased by Dracula. Her family is just one of the hundreds who experienced the New Hope Valley Halloween Express Saturday night.

New Hope Valley is a historic train museum that has been in Bonsal, located between Moncure and New Hill, since 1983 with a mission to preserve and share with the public North Carolina’s railroad history. The museum hosts rides on a monthly basis, with events like the Halloween Express and its Christmas activities bringing in most of the museum’s revenue.

Saturday marked the 27th annual Halloween Express, and the 27th time tickets for the event have sold out. The train ran five times throughout the day, carrying more than 250 passengers on each trip.

What is now the ride into the wicked woods used to be part of an important connector between Chatham County and Durham as part of the Durham & South Carolina Railroad throughout the 1900s. It was originally the only railroad to the American Tobacco factory in Durham.

The line was formally abandoned in 1979 due to degrading track conditions and the fact that many of the train cars were at risk of being scrapped. In 1983, though, a group of train-enthused individuals were able to purchase a portion of the line to preserve and allow its future operation as a historic railroad. This included the property and rail yard in Bonsal and a little over four miles of the track to New Hill.

The museum has grown over the years by purchasing new equipment and locomotives, but it still runs on an all-volunteer effort. To make the Halloween Express the smash hit that it is requires more than 30 volunteers, including train dispatchers, parking attendants, box office vendors and actors.

Marco Zarati is one of those volunteers. He’s helped with NHV for two years and he says events like the haunted train are important because they help educate people of all ages about the history of trains in N.C.

“Even though all these cabooses and cars are covered in spiderwebs and skeletons today, it’s still part of the history of railroads in North Carolina,” Zarati said. 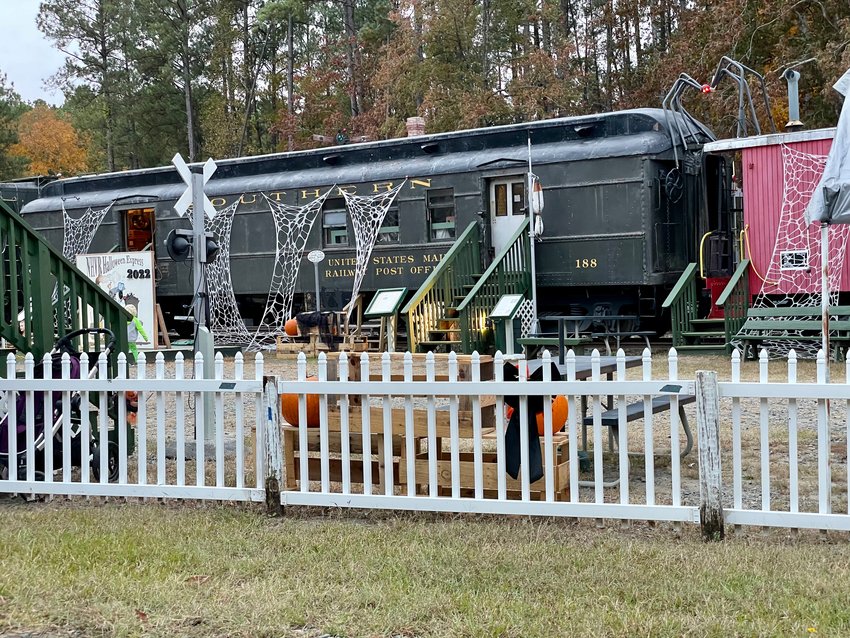 Singing pumpkins, spiderwebs and mummies were all part of the decorations set out by the volunteer crew at the New Hope Valley Halloween Express in …

Volunteers with NHV take on all sorts of roles. Zarati said one month he may be dressed up as a character to entertain the kids, the next he is working as a dispatcher and talking with the engineers about track conditions.

Many of the volunteers at the track have a deep knowledge and passion for train history in the state, which is why they return year after year.

“Just seeing the looks on the kids’ faces when they come off that train keeps me coming back,” said Victor Varney, an NHV volunteer. “And yes, that’s why I volunteer, but it’s also because this Halloween train is one of our biggest fundraisers for the year.”

As Varney explains his passion for NHV, he temporarily pauses to talk with the conductor. He was on dispatch duty Saturday night. The Halloween Express began running at 2 p.m., with the final departure at 7:15 p.m. Varney said helping the train run smoothly involved a 13-hour day with many volunteers arriving early in the morning and leaving long after the last passenger had departed.

The annual budget for the NHV averages about $250,000, but not a cent of that goes to the volunteers. Maintaining the old rail line is incredibly expensive, with constant needs for inspections, equipment upgrades and mechanical work. All of the funding comes from ticket sales for train rides and fundraising campaigns.

Volunteer members of NHV also engage in other historic preservation efforts. Recently, members began a fundraising campaign to “Save the Ten.” Ten railcars were left at Harris Nuclear Plant in New Hill and in danger of being scrapped, but NHV pooled the money to bring those cars to the museum where they now await restoration. That project raised an additional $150,000 in donations and saw $50,000 of state money help the museum’s efforts.

“Giving people the opportunity to ride a train doesn’t seem like it would be an important thing,” Varney said. “But when you see little kids and their parents experience it, and learn the historic pieces of it all, it makes them see the value in the history.”

John Morck is the vice president of NHV and has been involved with the museum since 1993. He said it’s been exciting to watch the museum grow over time and loves the community’s reactions to the train rides.

“It represents what short-line rail used to be like many years ago,” Morck said. “It’s a way to experience railroad history. Trains used to be a critical part of daily life for many North Carolinians. It’s how they got their goods, moved from place to place, so experiencing that is important to preserve.”

Families depart the Halloween Express squealing with delight and big smiles as Skellington welcomes them back safely to the station. Each spooky prop and eerie actor on the ride is a labor of love, meticulously placed along the historic track. It’s New Hope Valley’s trick at getting people to come enjoy the treat of N.C. rail history.

For more information about NHV, including tickets for their upcoming Santa’s Reindeer Roundup Rides visit triangletrain.com.