An alpaca gives a visitor a kiss during Carolina Sunshine Alpaca Farm's grand opening event. Visitors can see both fleece types — suri and huacaya alpacas — on the farm.
Staff photo by Anna Connors

An alpaca greets visitors at Carolina Sunshine Alpaca Farm's grand opening on Saturday. The farm, formerly M&M Alpaca Farm, opened after a year of being closed to the public.
Staff photo by Anna Connors

PITTSBORO — A year ago, Em Stecker and Danette Boezio, on their way to a funeral in Winston-Salem, noticed a “FOR SALE” sign at M&M Alpaca Farm, located between Siler City and Pittsboro off U.S. 64.

An exchange of email messages, a lengthy conversation with the farm manager and a tour — on National Alpaca Farm Day of all days — followed, and by then they were smitten. The two business partners from Apex closed on their purchase of the farm by December.

Now, almost a year after the new owners’ first visit, the re-named Carolina Sunshine Alpaca Farm is open to the public, with almost 300 visitors coming to its grand opening on Saturday.

Stecker and Boezio each see the circumstances precipitating their acquisition of the farm and its opening as “divine inspiration.” And for Stecker, she’s most excited about witnessing the culmination of farm staff’s work in the past several months and the return of visitors. 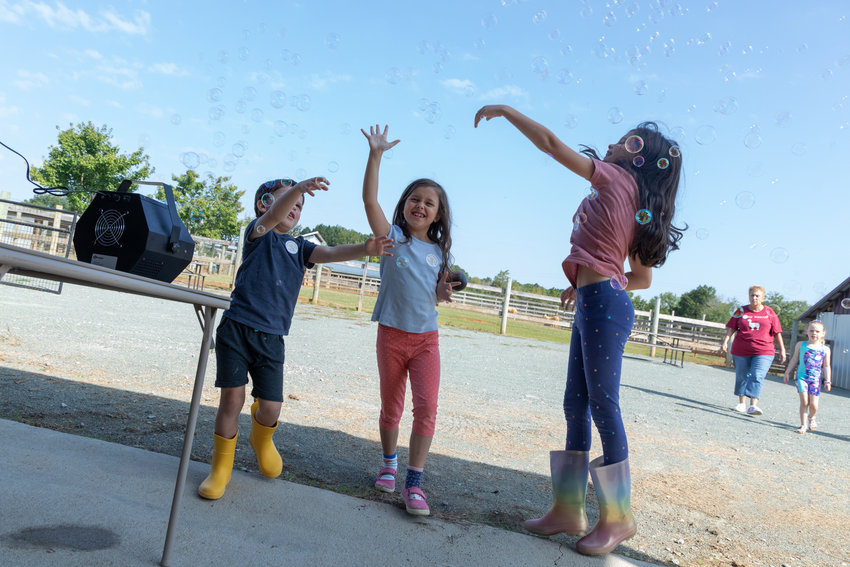 The hope is to foster an educational environment, she said, but also one of respite and relaxation.

For around a decade, the former M&M Alpaca Farm operated in the location of Carolina Sunshine Alpaca Farm. Its previous owners, Marty and Mary Raynor, ready for a life change, were hoping to sell the farm to someone who would keep it as intact as possible and retain it as an alpaca farm, said Farm Manager Laina Peck-Bostwick.

Laina and her wife, Sarah, have helped to run operations since the farm opened. They’ve overseen a number of responsibilities, from handling fiber processing to caring for and showing livestock.

“We have been here since the very beginning,” Peck-Bostwick said.

Peck-Bostwick said Stecker and Boezio came by the farm on the last day it was going to be open to the public. Prior to their visit, she had been preparing to take over managing the separate sale of farm land and alpacas.

“The ladies,” Peck-Bostwick said, “they saved the farm.”

For Boezio, owning an alpaca farm has been a dream decades in the making, something she first began researching in the 1990s. Neither Boezio nor Stecker come from farming backgrounds; both work day jobs as IT project managers, and credit the Peck-Bostwicks for what makes it all “doable.” Together, the four manage operations on the 15.5-acre spread.

“That’s the only way we could have done it,” Boezio said. “That they, one, had the experience already. love the farm — their hearts and souls are in it.”

On Saturday, the owners and farm managers, along with a crew of volunteers, greeted visitors who wandered around the farm and cuddled up to a few particularly interactive alpacas. Attendees also participated in arts and crafts activities and observed alpaca fiber being spun into yarn. 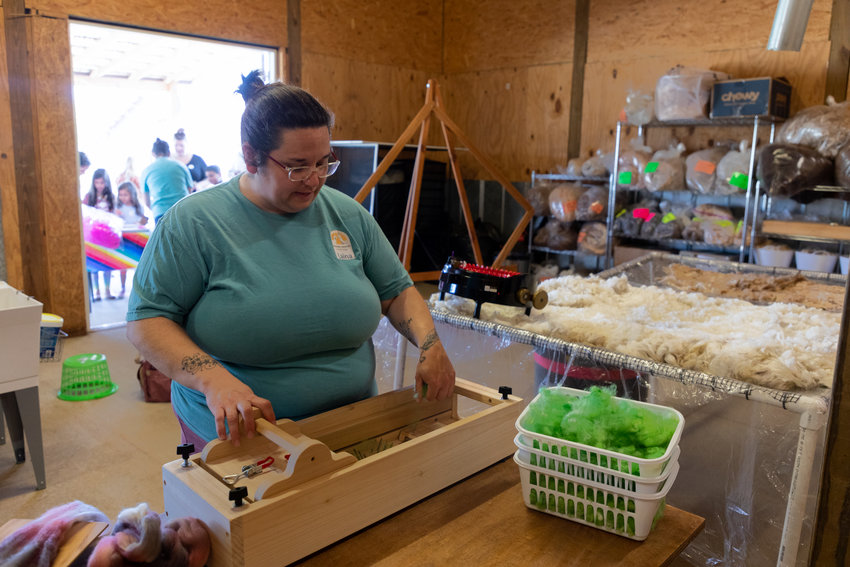 Laina Peck-Bostwick, farm manager of Carolina Sunshine Alpaca Farm, demonstrates for visitors how to turn sheared alpaca wool into yarn during the …

Those who stopped by the grand opening event ranged in age and experience with alpacas, including seasoned alpaca farm owners, families with young children and older couples.

Daniel Corpening, 35, traveled from Durham with his three children, wife and parents-in-law to celebrate their youngest child’s birthday, a specific request from his 5-year-old after seeing alpacas at the Museum of Life and Science.

“We just went on Google and Googled ‘alpaca farms,’ and then conveniently enough, there’s a grand opening for this one this Saturday,” Corpening said. “So we came on out.”

Daniela Ladinos, 25, also from Durham, visited with her sister. She said they first learned about Carolina Sunshine Alpaca Farm through a Facebook-sponsored post and hopes to soon be back.

“I’m glad I came, it was eye-opening and really interesting,” she said. 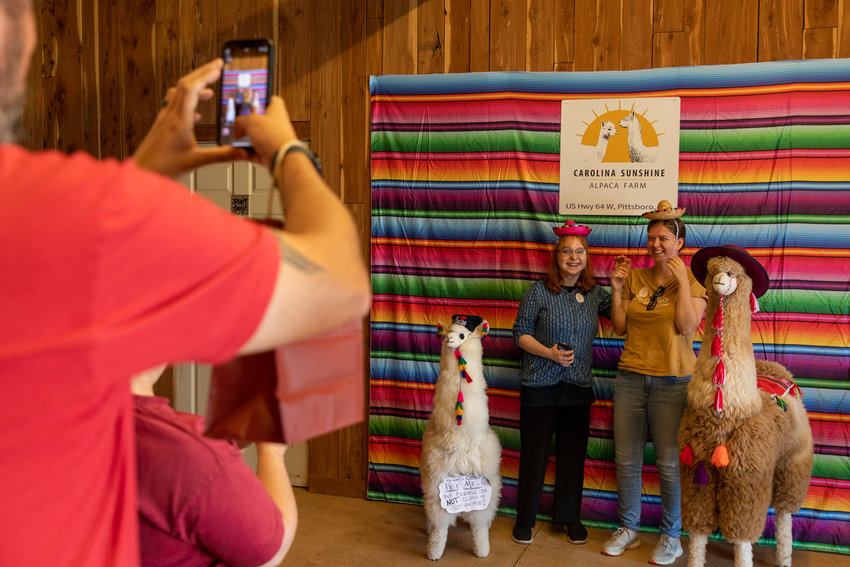 Visitors pose for a picture at Carolina Sunshine Alpaca Farm's grand opening event. Attendees also had the opportunity to participate in arts and …

Carolina Sunshine Alpaca Farm has 22 alpacas in total, including both Suri and Huacaya breeds, all of which were born in the U.S. Peck-Bostwick describes the Huacaya breed as the “big, fuzzy ones that everyone knows about,” while the Suri breed has a different look, their fiber growing out of their skin in tight twists.

Alpacas are a species of South American camelids, with other members of the family including llamas and vicuñas, a smaller animal native to the Andes. The farm’s alpacas have won a number of awards at shows across the country, most recently winning the 2022 AOA Classic Breeder Cup for Suri fleece.

Peck-Bostwick called alpacas “very gentle-to-the-environment livestock,” saying that due to their soft, padded feet and the fact that they only eat specific types of grass, the animal tends to have a lesser environmental impact when compared to other livestock.

“Plus you get a really awesome end product,” she added, referencing the fiber sheared from the animals that the farm both enters into competitions and sells.

Now, visitors can purchase tickets to take private, guided tours of the farm with possible touch interaction with the alpacas. They can also engage in a PacaVisit, in which people can conduct their own self-guided tours and “experience the peace of the farm,” whether through meditation or by knitting or drawing the alpacas.

Visitors to Carolina Sunshine Alpaca Farm can also buy a number of alpaca-related items at the farm’s store, including alpaca yarn or clothes made with alpaca fiber, locally-made alpaca-themed jewelry and even alpaca manure referred to as “PacaPu.”

“We suggest it 100% for putting in a garden bed or anything like that, definitely,” Peck-Bostwick said.

The farm and its store is open for regular visiting hours Wednesday through Sunday from 10 a.m. to 4 p.m.

Alpacas were first imported from South American countries to the U.S. in the 1980s. They quickly grew in popularity as they were bred and sold at auctions across the country, going from a zoo exhibition to lucrative livestock. That changed in the 2000s as studies and news media questioned whether the animals represented yet another agricultural speculative bubble, noting unsustainable prices.

One study published by the Giannini Foundation of Agricultural Economics by University of California, Davis, researchers Tina L. Saitone and Richard J. Sexton estimated the average selling price for an alpaca in 2004 as being $26,000 and $31,000 for the two breeds, Huacaya and Suri, respectively, with prices declining by several thousand dollars each year between 2005 and 2011.

Still, in 2022, there are alpaca farms across the country. Peck-Bostwick estimates that there are over 280,000 alpacas in the U.S. and approximately 200 farm owners in N.C. alone who own or operate farms with registered alpacas. It’s recommended that alpacas be registered through the Alpaca Owners Association Inc., a national group, she said.

Peck-Bostwick, who was president for the Carolina Alpaca Breeders and Owners association for several years, noted that the farm hopes to tackle misinformation regarding alpacas and the likelihood of them getting placed in unsafe environments like as household pets.

In the 10 years that Peck-Bostwick worked on M&M Alpaca Farm, she said they rescued at least 70 alpacas.

“And so as much education as we can do to help the public really understand what these guys are really about, what they need, what their true personalities are,” she said. “We’ll wind up having to do a lot less rescue work, a lot less dealing with all of that misinformation.”

One common misconception Peck-Bostwick said she encounters about alpacas from visitors is an expectation that they will be guaranteed interaction. Alpacas are like cats, she said, and will choose when they want to engage with people.

“They’re livestock, and that’s the biggest thing that people have to remember is yes, they’re super cute, and yes, they have a great, fantastic look,” she said. “But they are still livestock. They’re not your pet that you have in your house, and that you hang out with. They’re growing a product, and they have a purpose. And that purpose is not to be your best friend.”

An important part of being an alpaca farmer is understanding and being attuned to the animals’ needs.

“They tend to be really shy, really stoic animals,” she said. 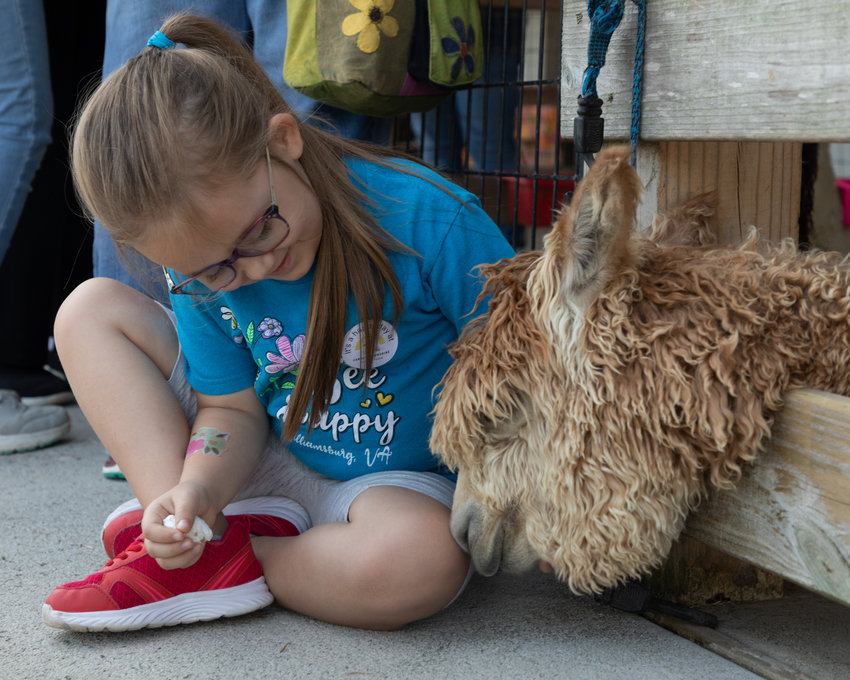 As the farm continues to grow under new ownership, Peck-Bostwick said they hope to hire more staff to help with running tours and operating the store. The farm has a few projects in the works, including planting vegetables and other greenery, she said. In June 2023, the farm also expects to welcome 10 alpaca babies.

Stecker expressed gratitude for the fact that the farm has been a part of the local community for 10 years.

“To be able to have that legacy of connection to the community and maintain that, and that people come out and re-acquaint themselves with the space and the alpacas, or experience it new — that’s really exciting,” she said.

Tickets to visit Carolina Sunshine Alpaca Farm, as well as more information regarding farm events and hours, are available at www.carolinasunshinealpacafarm.com. 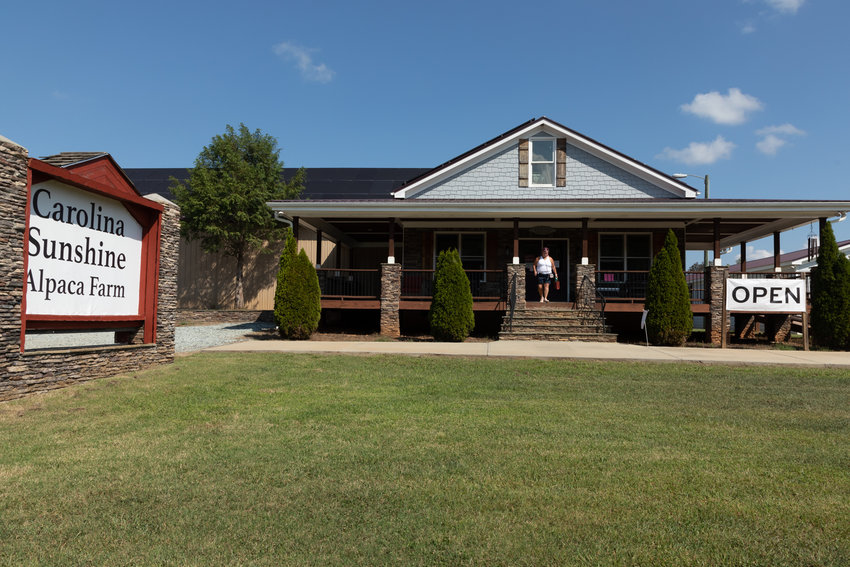 A visitor exits the farm store at Carolina Sunshine Alpaca Farm. The store sells a variety of merchandise, including 'PacaPu' or alpaca manure, …