In anticipation of Día de los Muertos, or Day of the Dead — a Mexican holiday celebrated in multiple Latin American countries in which the living honor the dead — Chatham’s Communities In Schools constructed an altar with prayer candles, sugar skulls and paper marigolds at its office in Siler City.

In the center of the altar last Thursday stood one picture: Northwood High School student Bryan Vilchis, who died in a car crash on Old Graham Road on Oct. 23.

Vilchis, 18, played football his first two years at Northwood. Both Vilchis and Patterson were friends to many. Social workers and counselors will be on-site to offer support to students and staff members, CCS said in the Monday email.

“This is an extremely painful time for our Northwood staff and students,” said Superintendent Dr. Anthony Jackson. “We grieve with Desmond’s and Bryan’s families and mourn their loss.” 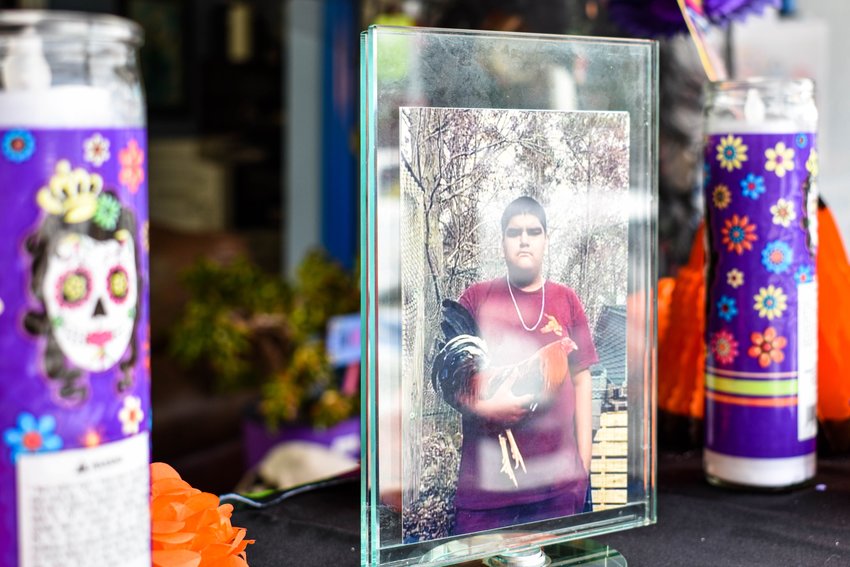 A picture of 18-year-old Bryan Vilchis, who died in a car crash Oct. 23, at the Día de los Muertos altar made by Chatham's Communities in Schools. / Staff photo by Victoria Johnson

Vilchis was driving at least 90 miles per hour, the N.C. Highway Patrol told the News + Record, when his car ran off the road, crossed the center line and then overcorrected and hit a tree — at a speed of over 80 mph.

Patterson was in critical condition following the crash and treated at UNC Hospitals, where his family said he had two strokes and several surgeries. Vilchis died at the scene of the accident; the final report for the crash from the Highway Patrol was not posted at the time of publication.

A GoFundMe page launched to help cover Vilchis’ funeral expenses and other costs had raised nearly $13,500 of a $15,000 goal by Monday morning. The page can be found here.

Patterson's brother, Tauvaris Barrett, also started a GoFundMe page for Patterson in anticipation of large medical bills. Nearly $7,000 of the page's original $15,000 goal has been raised by last Tuesday morning. The goal was increased to $40,000 and by Tuesday, more than $27,000 raised.

"It would mean so much to Des and our family if you can contribute whatever you can to Des’ medical expenses. Please continue to send positive energy into the universe and keep Des in your prayers for a speedy recovery," Barrett wrote on the page. "All we can do is remain hopeful and leave it with God’s will. Thank you so much for taking the time to read this and think about Desmond and our family."

A prayer vigil for Patterson was held by Mt. Zion Missionary Baptist Church and Chapel of the Pines Presbyterian Church on Sunday, under the oak trees at Mt. Zion.

“Our hearts go out to Desmond’s and Bryan’s families,” Northwood Principal Bradford Walston said. “For both the students and staff who knew them personally or who have after this tragedy come to know the kind of young men they were, this has taken a heavy toll. We want our students and their families to know that we are here for them and will continue to provide whatever support our students need as they grieve.”

By last Monday, a memorial adorned with flowers, crosses and a teddy bear was erected at the site of the crash, where friends and loved ones visited throughout last week to pay their respects.

“I love Desmond and his family,” one poster said of Patterson. “I’m going to help them in any way that I can.”

“RIP Bryan,” another donor said of Vilchis. “You were such a sweet & caring person. We will miss you.”