PITTSBORO — The Chatham County Commissioners bid farewell to two fellow board members last Monday, recognizing Diana Hales (Dist. 3) and Robert Logan (Dist. 4) and honoring them for their service to the board and the county.

Hales, who will be succeeded by Democrat David Delaney, did not seek re-election after eight years as commissioner. During her time in office, she was a staunch defender of the agricultural nature of the county and a visionary for Chatham’s future, according to her colleagues on the board. She supported the opening of six different county buildings, the development of the county’s megasites and oversaw future-oriented projects like Plan Chatham.

“I will unashamedly say that this small woman has packed the biggest punch on this board,” said Karen Howard, the board’s chairperson, at the Nov. 21 meeting. “She has an eye for detail, and her ability to grasp concepts and explain them well to others is second to none.”

Howard and other county staff recounted Hales’ apparently infamous Sunday night emails before commissioners’ meetings — chock full of questions about the agenda items, and potential ponderings about policies the board could implement. Howard said those emails spoke to the incredibly thorough nature of Hales and her serious attitude toward her role.

“All the things we all value about Chatham but many of us take for granted,” Howard said, “— Diana has had the foresight and fortitude to stand up and defend those things.”

Logan — who will be succeeded by Democrat Katie Kenlan, who beat Republican Joe Godfrey in November — didn’t seek election to the seat. The former Chatham County Schools superintendent was appointed to the role of commissioner following the resignation of long-time commissioner Jim Crawford last December.

Logan was sworn into office in February, and in his brief nine months on the board, he had a hand in projects that will change the trajectory of the county. He supported economic development through the support of megasites that brought VinFast (at Triangle Innovation Point in Moncure) and Wolfspeed (at Siler City’s Chatham Advanced Manufacturing site) and pushed for continued education through the Chatham Promise program. Chatham Promise ensures eligible residents who graduate from a public high school, private school, charter school or homeschool will be guaranteed up to two years of free in-state tuition at Central Carolina Community College.

“Robert Logan answered the call to civic duty,” Howard said. “He has made Chatham County a better place for all residents and we wish him health, happiness and continued prosperity.”

Hales and Logan were honored with individualized official ordinances thanking them for their service to the county. They each thanked county staff and called their time in office a “privilege.”

“I’ve enjoyed this role more than I anticipated,” Logan said. “I’m grateful for the opportunity and I feel good about the future of Chatham County — where it’s going and the leadership that it’s under. A lot of great things are getting ready to happen.”

Hales shared similar sentiments and listed the achievements the commissioners have accomplished in her eight years on the board. She said she was especially proud of the movement toward equity in the county including the removal of the Confederate monument in front of the Pittsboro Courthouse, commemorating Juneteenth and honoring the legacy of the county’s lynching victims with a historical marker.

“I don’t have a single accomplishment I’m most proud of, I have a list,” Hales said. “Thank you to my fellow board members, both present and past, it has been an honor to serve with you.”

Hales and Logan will officially end their duties when Delaney and Kenlan are sworn in at the next meeting, which takes place 6 p.m. on Monday, Dec. 5, at the Historic Courthouse in Pittsboro.

Before they were allowed to say farewell, Hales, Logan and other commissioners covered several business items focused on the future of the county. Four public hearings came before the board last Monday, all dealing with land near the Moncure megasite, the future location of VinFast’s manufacturing facility.

Three of the four public hearings were rezoning requests along or adjacent to Old U.S. Hwy. 1 to turn private property into industrial business-ready ventures. None of the three had developed site plans for their future businesses, but all were preparing to maximize benefit for the seemingly inevitable future of growth along the corridor in Moncure.

“This is a growing area,” said Angela Plummer, zoning administrator for the Chatham County Planning Board. “People want to get ahead of the curve to make this area into businesses and help property owners make money.”

Plummer said she anticipated eight more rezoning requests to come before the commissioners at the board’s December meeting, all regarding properties in the same area around the megasite.

The fourth public hearing in the area was an abandonment of Moncure Flatwoods Road. The road was owned by the county and the abandonment permanently closes a portion of the road and gives ownership of the right of way to VinFast. Giving ownership of the roadway to VinFast means 1.36 miles of the road will no longer be operable. The board unanimously approved closing the roadway and transferring ownership after they found it “not contrary to the public interest.” 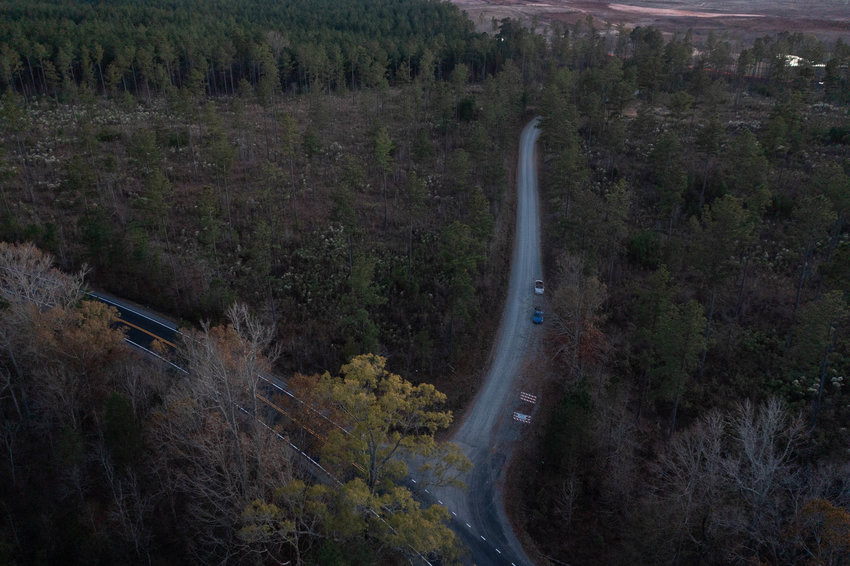 A portion of Moncure Flatwoods Rd. (gravel roadway) was abandoned by Chatham County at the Board of Commissioners meeting Monday, Nov. 21. The 1.36 …

• Last Monday’s board meeting also featured updates on the financial standing of the county. First quarter budget updates showed the county is on pace with its revised budget. Thus far, the county has spent more than $22.8 million, or 13.5% of total planned expenditures. Most of those expenditures came from salaries and benefits, which is similar to the Q1 spending of previous years for the county.

The county revenues in Q1 are on a similar pace, totalling $22.2 million or 13.1% of total planned revenues for the year. The figure puts the county revenues up 4% from this time last year, but the distribution of those revenues is also different. For example, environmental health revenues are down 22%, but building inspection revenues are up 25%.

The budget updates also discussed year-end sales tax, which showed strong sales performance in the county. Chatham saw a growth of $4.1 million in sales tax growth over the year prior. Overall, county staff said the budget is in good standing and on pace to meet the proposed plans for the fiscal year.

• The board also heard updates on funding from the American Rescue Plan Act (ARPA). The act provided federal money to local governments to help relieve the burden of the COVID-19 pandemic and help reboot the economy. Chatham County has spent the funding on a variety of public services including parks, vaccine incentives and community conversation events. So far, the county has already spent or obligated $5 million of ARPA funding, with $9.4 million available. The funds must be spent by December 2026 or they will expire. The plans for those expenditures must be submitted by December 2024.