If upheld, the ruling could bring more than $1.75 billion to N.C. public schools

The North Carolina Supreme Court made a landmark ruling last Friday in the long-standing Leandro case, a 4-3 decision along party lines that should pave the way for millions of dollars in state funding to go toward public schools.

Chatham officials and education advocates said the decision was historic and set the stage to benefit students throughout the county and the state.

“This is affirming news and has significant potential benefits for Chatham,” said Dr. Mary Kolek, chairperson of the Chatham Education Foundation, in a statement Friday. “Full funding of Leandro will allow us to staff and resource public schools in ways that will make a significant difference in terms of student learning and well-being.”

The court upheld a prior ruling from Judge David Lee that the state must transfer the money necessary to fund years the Leandro Comprehensive Remedial Plan. The plan, provided by California-based education consulting group WestEd, called for $1.75 billion of state funding to go toward schools. Lee’s decision was later appealed and the figure was reduced to $785 million.

“For twenty-five years, the judiciary has deferred to the executive and legislative branches to implement a comprehensive solution to this ongoing constitutional violation,” Judge Robin Hudson, a Democrat, wrote for the court majority. “Today, that deference expires.”

Republican officials, including Justice Phil Berger Jr., who penned the dissenting opinion, say the ruling blurs the lines between the branches of government and argue no court has the power to order the state legislature to spend tax dollars.

“The state constitution explicitly recognizes that it is for the General Assembly to develop educational policy and to provide for its funding in keeping with its legislative authority,” Berger wrote.

Last Friday’s decision was historic because it marked the first time courts have ordered the state to provide funding in the 30-year-old Leandro case.

The case deals with a lawsuit initially filed in 1994 by five low-income school districts to get additional state funding. In the original case, the North Carolina Supreme Court ruled the state constitution guarantees every child “an opportunity to receive a sound, basic education,” and the state was failing to meet that obligation.

While the decision was historic, Jaime Detzi, executive director of the Chatham Education Foundation, says there is still a long way to go. Republican legislators and appeals court judges are likely to file lawsuits to stall or block the transfer of funds, which are currently available in state coffers.

“This is a great first step to rectify the long-standing unwillingness of the State of N.C. to meet their constitutional obligation to provide a sound and basic education to all students,” Detzi said. “We can no longer let politics dictate meeting the bare minimum requirements of our state constitution.”

Politics, however, are a constant in this case. The ruling was made just days before the midterm election, which could change the balance of power in the N.C. Supreme Court with two judges on the ballot. Tuesday's election saw both Republican candidates for the N.C. Supreme Court win their election giving the GOP a 5-2 majority to potentially reverse last Friday's ruling.

This election could also bring more dissenting Republicans into the state House and Senate to push back against the release of the funding.

According to retired Republican N.C. Supreme Court Judge Bob Orr, the timing of bringing the case before the court was likely not tied to political aims.

“Once the majority and dissent are in circulation, the case comes up at the next opinion conference, which I assume was earlier in the week, and final votes are taken on case,” Orr said in a statement. “Then the opinion is filed at next opinion day, which was (last Friday). Leandro decision’s release was more timing of when it’s ready. I’ve seen cases held until after an election but I assume all sides were OK with filing it (last Friday).”

Regardless of how the decision came to be, whether the ruling sticks or not is largely dependent on the outcomes of Tuesday’s midterm elections.

Brent Woodcox, senior policy attorney for Senate Leader Phil Berger’s office, tweeted Friday Republicans would appeal the decision if the party wins a majority on the state Supreme Court in the election.

Prediction: Not a dime of taxpayer money is ultimately spent on this unprecedented and unconstitutional order before it is blocked and reversed by a newly seated NC Supreme Court next year. #NCPOL https://t.co/ajm9MrdO7u

One of the non-court seats up for election that could sway the balance of power in the N.C. House is Dist. 54, currently held by Democrat Minority Leader Rep. Robert Reives II. He told the News + Record if the decision is implemented, Chatham students stand to gain.

“More money provided to the district annually would mean that local leaders could allocate money to places where it is sorely needed,” Reives said. “More money would flow for the students who need it most, like children with disabilities and those with limited English proficiency. Additional funding means that Chatham County Schools will have more flexibility to give individual students the attention and resources they need.”

Karen Howard, chairperson of the Chatham County Board of Commissioners, also lauded the decision by the N.C. Supreme Court. She echoed Reives sentiments saying this decision is an essential component to growing education in the county.

“The Leandro Comprehensive Remedial Plan was research-based and widely supported by educators, business leaders, mental health experts and higher education professionals,” Howard told the News + Record. “That matters for children, families, communities, and our economic future, not just in Chatham, but across the great state of North Carolina and I am delighted that we are finally here.”

The potential impact in CCS

Reives said the ruling means Chatham County Schools and students across the state are receiving the respect and attention they deserve. Reives also cited Every Child NC’s Leandro Impact Tracker — which estimates how state funding will change in a given district upon implementation of the Leandro Plan — as proof of the impact of Leandro on Chatham County Schools.

The tracker shows CCS would see a 32% increase in state funding over the next eight years from the current mark of $59.4 million to $78.2 million under Leandro. While the tracker is based on estimates, the point is clear — Leandro would provide more funding to CCS and other public schools throughout the state. These increased funds in CCS could mean an additional $2,000 per pupil, and fund 69 teachers, 24 counselors, 19 social workers and more. 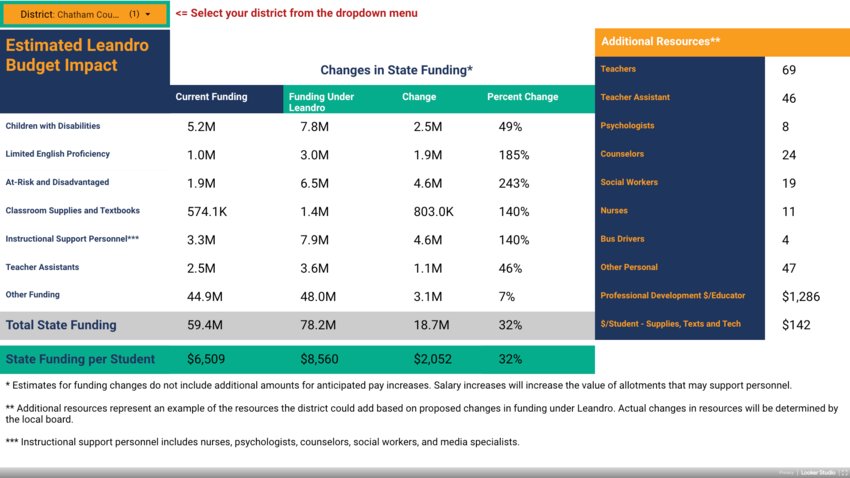 The man in charge of these potential funds, CCS Superintendent Dr. Anthony Jackson, called last Friday’s ruling “a game-changer” for students. He said the resources the funding could bring to the district present an opportunity, especially for at-risk students.

“This ruling also ensures that additional resources are designated for statewide Pre-K programs to include additional Pre-K slots to serve more students and the training and increased salaries of teachers in that sector,” Jackson said. “This is a great ruling for all students and communities.”