RALEIGH — On the lawn of the Governor’s Mansion, North Carolina politicians and Wolfspeed executives made official on Friday morning what had been anticipated for weeks: the Durham-based semiconductor and chip manufacturing company is coming to Siler City’s Chatham Advanced Manufacturing site.

The company’s project, a facility to produce silicon carbide chips for industrial and commercial uses, sets a new record for the largest economic development win in state history — bringing an expected $5 billion investment, along with 1,800 jobs over the next five years paying an average annual wage of $77,753. It comes less than six months after Vietnamese electric vehicle manufacturer VinFast’s then-record-setting $4 billion announcement to build a production facility at Chatham’s other megasite, Moncure’s Triangle Innovation Point.

“The jobs that Wolfspeed is bringing will pay 87% more than our current average wage. That is a huge win for Siler City, Chatham County and the region,” said Chatham County Board of Commissioners Chairperson Karen Howard. "I am so proud of Chatham and the town of Siler City for their tenacity."

In making the announcement, Gov. Roy Cooper said Wolfspeed’s choice of Chatham County and the state “further validates North Carolina as the epicenter of clean energy.”

Live at for @ChathamNR the Governor’s Mansion in Raleigh where Wolfspeed is expected to announce 1,800 jobs and billions in economic development for Chatham County. Follow along for updates.

“This is another milestone in our drive toward a clean energy economy as it will boost electric vehicle manufacturing and offshore wind while fighting climate change and putting money in the pockets of everyday North Carolinians with great paying jobs,” Cooper said.

In Chatham County, Wolfspeed’s plant will grow the crystalline material that goes into its silicon carbide chips. The material is also produced at one of its headquarter facilities in Durham and will be complemented by the Chatham plant.

As of Friday’s announcement, Chatham County, so far in 2022, has already landed $9 billion in investment and 9,000 new jobs. Chatham County’s Economic Development Corporation took advantage of the numbers and the announcement’s placement also on Sept. 9, 2022. They passed out pins reading “$9B/9K/22.”

Michael Smith, president of the EDC, said these numbers are more than just coincidence.

“This is going to be a real blessing for our community,” Smith told the News + Record. “This is going to give more people a choice, a better choice, to live and work right in Chatham County.” 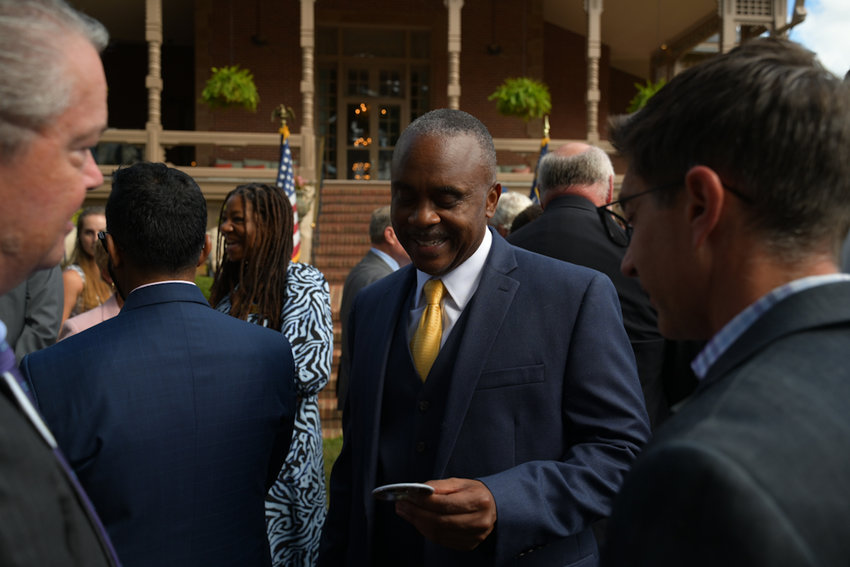 For context, during all of 2021, Cooper announced 24,224 new jobs in North Carolina, representing 185 business recruitment, expansion or rural development projects that engaged with the North Carolina Department of Commerce or its team at the Economic Development Partnership of N.C. Value of those projects: $10.1 billion of capital investment.

The fire underneath Chatham County’s red hot 2022 shows no signs of cooling off anytime soon.

Wolfspeed announced it will build its new silicon carbide facility on about 350 acres of the CAM site, located just off U.S. Hwy. 64 near the Randolph County line. The total size of the site is 1,802 acres, but even after the Wolfspeed announcement, there will be 1,450 acres still available to develop — almost three square miles. 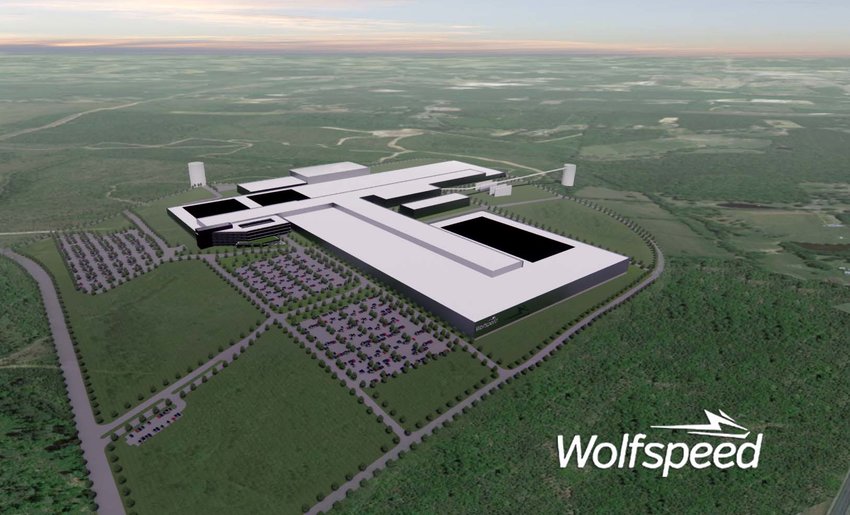 Wolfspeed announced it will build its new silicon carbide facility on about 350 acres of the CAM site, located just off U.S. Hwy. 64 near the …

“This moment is a decade in the making,” said Chatham County Manager Dan LaMontagne. “We made it to the finish line on this one, but it’s really just the starting line. There is much more to come with an additional 1,400 acres at the CAM site. We hope to have many more moments like this at the Governor’s Mansion in years to come.”

LaMontagne said the county had several different tenants get close to purchasing space at the CAM site before Wolfspeed’s decision. He added that Wolfspeed was fit for the vision of the site and the county, and was among others who credited CAM site co-owner Tim Booras for his commitment to finding the ideal tenant for Siler City and the county.

“Our community is fortunate to have had great ownership [of the CAM site] that has stayed with us over time, to win this project,” said Michael Smith. “They have had other opportunities to do other things with that site ... It’s all because of having an owner like that who knows what he’s doing and has been committed to making this happen.”

This announcement certainly generates additional buzz for the county at a local and state level, but it also raises concerns among current residents. With VinFast already on the way and expected to break ground later this month, roadway plans from N.C. Dept. of Transportation show properties across Moncure are going to be affected.

Another huge development project in the area may increase the consequences of construction. Local officials like LaMontagne, however, say the county has long planned for this kind of impact.

“The change is certainly hard for everybody, but we’re going to see a lot of this growth really benefiting people’s lives,” LaMontagne said. “We’re going to have jobs where people’s children can come to work in Chatham County, which we don’t have now. This is going to change families and generations to come.”

The EDC’s Smith also said preparations for this growth have been underway through local policies like the Moncure Small Area Plan and intentional small business investments.

“We recognize with Wolfspeed, VinFast and Toyota all in a line they are these massive projects,” Smith said. “We want to connect them with the small businesses that are already in Chatham County.”

Howard said the growth can be challenging, but it presents an opportunity to "live, work, play and stay" in Chatham County. She also said the growth of the county is intentional through the longstanding investment in megasites like Triangle Innovation Point and the CAM Site.

"Neither one of these is a surprise," Howard said. “We had been investing in megasites with the goal of bringing in really large-scale industries."

She said she hopes these companies also foster relationships with public institutions like CCCC and Chatham County Schools to help foster the next generation of careers in the county.

Some of those relationships with young people are already happening, according to Wolfspeed executives. They announced a continuing partnership with N.C. A&T University to create a workforce pipeline program.

“We are particularly excited and proud to not only expand Wolfspeed’s footprint in our home state of North Carolina, but also our relationship with North Carolina Agricultural and Technical State University to develop a workforce of the future,” said Gregg Lowe, President and CEO of Wolfspeed. “The Chatham County facility will enable the increasing adoption of Silicon Carbide and will drive the dramatic growth of the technology as the power semiconductor market transitions from silicon to the much more efficient Silicon Carbide technology.”

Cooper told those gathered for Friday’s announcement that the speed of the development is positive. He said the sooner these developments like VinFast and Wolfspeed are completed, the sooner local residents can reap the rewards of those investments.

“We want to move fast because we know we are in global competition,” Cooper said. “The faster we can make semiconductors and the faster we can move to a clean energy economy, the more that North Carolina families will benefit from it. I know that there are growing pains.”

Cooper said he wants to minimize displacement in roadway construction and development plans, but he noted that the development is too important not to get done. He also called upon local officials to make intentional investments in the Siler City community to ensure it remains affordable for all residents.

The company also has performance-based incentives with up to $775 million if Wolfspeed meets hiring and investment goals.

Today, Gov. Cooper announced that Wolfspeed will create 1,800 jobs and invest $5B in Chatham County, the largest economic development investment in NC’s history. This milestone in our transition to a clean energy economy will put money in the pockets of every day families. pic.twitter.com/qTlKjJcGTy

The tax incentives appear to have played a big role in finalizing the deal. Chatham County was in contention for the new silicon carbide facility with Marcy, New York, where the company already has a manufacturing plant.

The company is also likely aided by the recently passed CHIPS Act, which aims to boost American semiconductor research, development and production by providing incentives for chip producers to build in the U.S.

Wolfspeed’s project is estimated to grow the state’s economy by more than $17.5 billion over 20 years, the time period when the JDIG could be active, according to the Governor’s Office. Using a formula that takes into account the new tax revenues generated by the 1,802 new jobs, and accounting for a company investment of $5 billion, the JDIG agreement authorizes the potential reimbursement to the company of up to $76.1 million, paid over 20 years.

Phase one of construction is expected to be complete by 2024. The second phase, which could push the entire facility to one million square feet, will be completed in 2030.