SILER CITY — Business interests and a busy schedule led Walter Petty to resign as a Chatham County commissioner in 2019. A higher call to be a political problem-solver has brought him back, this time seeking a higher office: the N.C. House Dist. 54 seat in the state’s general assembly.

Petty, a Republican and lifelong resident of Siler City who’d served as commissioner since 2010, made the announcement last week, saying he intends to file for the seat held since 2014 by Rep. Robert Reives II.

Barring a May primary, Petty and Reives will face each other in the general election next November.

“Serving as a county commissioner provided me the opportunity to see that many of the challenges facing us can only be solved at the state level,” Petty, 63, told the News + Record. “My intentions are to leverage the relationships I’ve built with House members and leadership to accomplish the goals I’ve had for the district since first getting elected in 2010.”

Those goals, he said, include bringing more jobs to the district, aiding parents and students within the education system, and supporting law enforcement personnel.

Petty stepped down from his post as a Chatham County Commissioner in the middle of a four-year term back on April 15, 2019, citing the pressing time demands of his business — Atlantic Power Solutions, which sells and services generators for agricultural and industrial use, which was undergoing a period of rapid growth.

At the time, serving in the Dist. 5 seat since 2010, he was the lone Republican on the five-member board. Petty’s appointed replacement, Andy Wilkie, was defeated in the November 2020 election by Franklin Gomez Flores. In the process, Gomez Flores — who won by just 322 votes over Wilkie — became Chatham’s first Latino commissioner.

Since his resignation — which caught his fellow commissioners, and the rest of Chatham County, by surprise — Petty says he and his team have streamlined Atlantic Power Solutions’ operations. APS has also completed a move into the old Goldston Sports Arena, on U.S. 421 just outside of Goldston, redesigning it and upfitting it for “better efficiency” as an operations hub and parts center.

“This, plus a great team, has allowed me to structure the business in a way that allows me to properly represent the district,” he said.

Even so, Petty says the switch from county commissioner to a state-level office will have the exact same focus: representing the people of the district.

The newly drawn N.C. House Dist. 54 encompasses all of Chatham County and the northeast corner of Republican-leaning Randolph County. The current district to which Reives was elected includes all of Chatham and a small corner of Durham County, in the slice of the county south of I-40.

Petty doesn’t believe including a part of Randolph, and excluding Durham, necessarily favors him in a race against Reives, who’s considered a rising star in state Democratic politics and was elected to a two-year term as House Democratic Leader in late 2020. All the new maps would give Republicans a sizable advantage in future elections even if the two parties roughly split the statewide vote 50-50, outside political analysis has shown.

“I don’t think the newly drawn district changes the numbers too much from what they were before regarding voter registrations,” Petty said. “I believe that people, regardless of party affiliation, will evaluate the policies most likely to benefit the district and make their decisions based on that.” 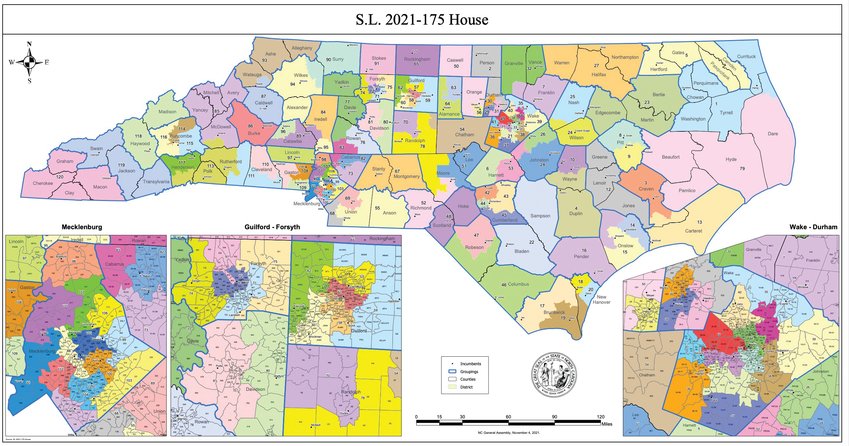 The proposed map for N.C.'s House of Representatives disctricts. Dist. 54 now includes a portion of Randolph County, as well as all of Chatham. / Courtesy of NC General Assembly

Petty’s announcement was made in an email message to a select group of people the day before Thanksgiving. It caught Reives — who was gathering with family members for the holiday, and was told of Petty’s announcement by the News + Record — by surprise. The two haven’t spoken, each confirmed on Monday, but Petty said his campaign manager, former Chatham Commissioner Brian Bock, did communicate with Reives after the announcement; Petty expects to speak to his likely 2022 opponent soon.

Reives, in response to Petty’s announcement, said he looked “forward to serving the people of Chatham and now Randolph for another term.”

“The people here know that my focus is on them always and that they have an independent advocate for them in Raleigh,” Reives said. “I will continue to be of service.”

“Over the years I have developed a friendship with Rep. Reives and respect him,” Petty said. “I want to make sure people understand I’m running to further policies that I feel will be better for our district, not against Robert as an individual.”

And Petty insists he’s focusing on just that — policies, not long-term political aspirations.

“I have no longer term goals,” he said. “I’m focused on winning this race and serving the people of the district.”

He said the primary factor in his effort to defeat Reives will be engaging with voters.

“The key to winning this race is getting more people engaged so they know they are part of the process and the policies I support and promote will be better for the district,” Petty said.

In his announcement, Petty cited his reputation for listening to all sides of an issue, saying it had earned him “the respect of residents from all political parties” and made him the only Republican in Chatham County’s history to be elected to three terms as county commissioner.

When he stepped away from the seat in 2019, Petty said he never thought he’d serve more than one term as commissioner. He said then one of his greatest accomplishments was working to increase the county’s budget while maintaining the same property tax rate.

“I’ve focused on looking after taxpayers’ dollars as if they were my own,” Petty told commissioners and the audience after announcing his resignation. “I’ve done my best to stay away from party politics, partisan agendas. I’ve tried my best to serve all citizens based on the facts as I’ve understood them.”

Petty was well-liked and well-respected among his fellow county commissioners. Board Chairperson Mike Dasher said after Petty resigned that he’d be missed on the board.

“He has served this county well (and) he has been an absolute pleasure to work with,” Dasher said. “I’ve just enjoyed getting to know him over the last couple years. We’re going to miss him.”

“Walter and I have not always agreed politically,” Commissioner Karen Howard said, “and we’ve had our share of battles, but you have always been a friend.”

Petty said at the time that went both ways.

“Even though we had a difference in opinion, we had a mutual respect,” he told the News + Record of his fellow commissioners. “In resigning, the remaining board members made what I believe to be heartfelt comments and I am very grateful. Each one of us are an elected official and have an obligation to represent the people that elected us. Sometimes when defending our positions in debate, things were often said out of the way. Then you learn to put it aside and focus where there is common ground to accomplish something everyone can agree on.”

Now, as he casts a larger vision for service in a heavily-partisan legislature, Petty says he’ll focus on three specific areas for Chatham County:

• Supporting legislation that “ensures students, teachers, administrators, and other school employees respect the dignity of others and acknowledges the right of others to express differing opinions without fear of being marginalized or discomfort.”

• Addressing “the disparity” of the N.C. Tier system, which favors less prosperous counties with state economic development grants and projects. Large portions of Chatham County would quality as Tier 3 — the lowest, and most disadvantaged — in the state, but pockets of wealth in northern Chatham classifies it as Tier 1, one of the most prosperous in the state.

• Bringing new jobs. Petty wants to use his influence as a legislator to attract a large manufacturing facility to the megasite in Siler City — the Chatham-Siler City Advanced Manufacturing Site, a 1,802-acre development-ready tract which Petty says can provide thousands of needed jobs to the Western portion of the district.

In Reives, he’ll face a legislator who’s served since being appointed to the seat in 2014 and whose election as House Democratic Leader came as the result of what North Carolina’s former Democratic Lt. Gov. describes as Reives’ innate abilities to work with others.

“He is a natural leader who I believe, is destined to play a bigger role in North Carolina politics,” Dennis A. Wicker of Sanford told the News + Record after Reives was chosen as minority leader. 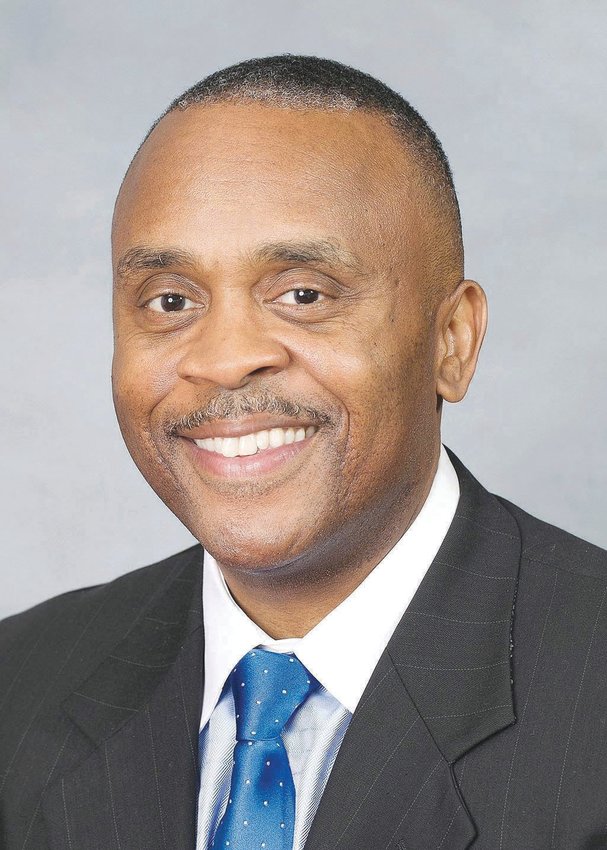 Reives, 51, who lives in Goldston — his wife Cynthia is a Goldston native — is an attorney with the Sanford law firm Wilson, Reives & Silverman. His father, Robert Reives Sr., is a long-time member of the Lee County Board of Commissioners, and the younger Reives told the News + Record earlier this year his decision to seek public office was a always just a question of timing.

State political leaders said Reives’ ascension from appointee to party leader was probably historically unprecedented. Wicker, a friend of both Reives men who served two terms under former Gov. Jim Hunt, told the News + Record it was “no surprise” the younger Reives was elected minority leader.

“He is one of the most respected, well like, articulate and trustworthy legislators in the General Assembly ... a description heard about him from both sides of the aisle,” said Wicker, who himself served six terms in the N.C. House. “Robert understands the essence of public service. He knows he is there for the greater good, not for personal gain. He has driven to make the quality of life better for people than when he found it. It’s a value that he learned from his parents. The people of Chatham County are fortunate Robert is representing them in the legislature.”

Reives won election, then reelection to the seat in 2016, 2018 and 2020 — defeating, among others, in 2014, the same Andy Wilkie who lost to Gomez Flores for county commissioner last year. Reives’ focus in office has been on broadband access, healthcare and education.

“The past four years Robert Reives and I have worked as a team,” said former Rep. Darren, a Wake County Democrat who supported Reives for the leadership post. “Now that Robert is the House Democratic Leader, I am confident he will do a great job in bringing people together ... Robert is highly respected by Republicans and Democrats alike and he understands the needs of rural areas.”

Reives told the News + Record that in his new role as House Democratic Leader, he’s been a part of landmark legislation involving representative of both parties.

“I have been proud to sit at the negotiating table to ensure that the people in this district receive their fair share and that the state proceeds along a path that makes us a beacon of opportunity for those willing to work to get it,” he said. “I have been proud to have been with the Governor, Leader Blue, President Pro Tem Berger and Speaker Moore to negotiate and enact more consensus and historic legislation and joint announcements this year than the entirety of my previous seven years including the successful joint recruitment of Apple to this region and the first budget signed by Governor Cooper in his six years in office. I will continue to make certain that their voices are heard in Raleigh and that their needs are met while at the same time negotiating to make sure that we get things done.”