Nearly every inch of his bedroom is filled with jerseys and helmets from NFL teams and paintings depicting aspects of the game. He even has a custom-painted jersey on his wall with his name from his favorite team: the New England Patriots. 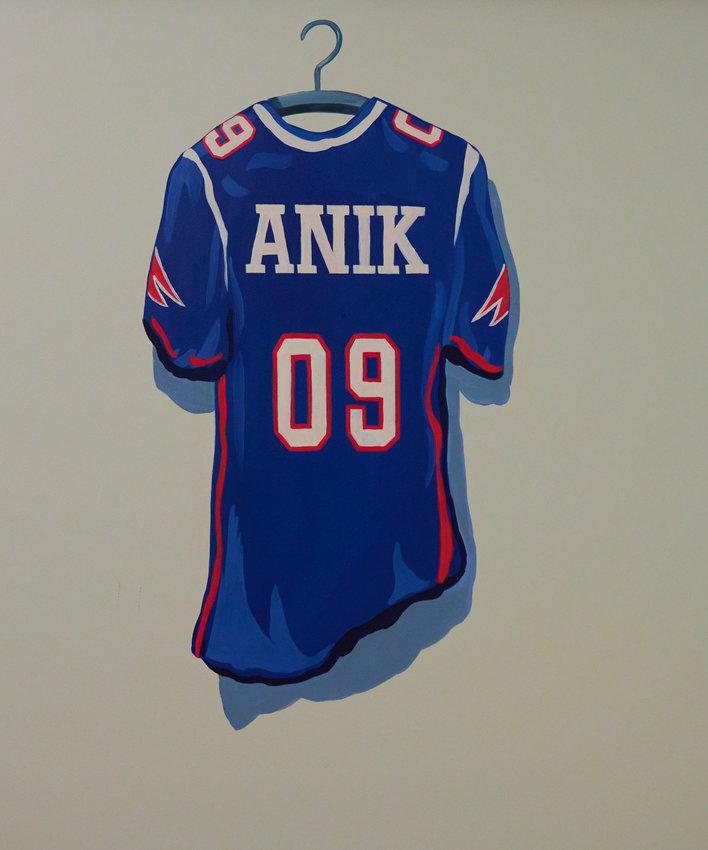 On the wall of his room, Anik Gupta has a custom jersey painted to show off his favorite team: the New England Patriots.

The 10-year-old’s passion for football led him to start his own YouTube channel, where he’s built a following predicting the outcomes of weekly NFL games and providing analysis. After more than two years in front of the camera, the channel — Lil’ Football Fan — has amassed more than 600 subscribers and continues to grow.

Gupta started the channel one day after school when he was 8. He took his mom’s iPhone, recorded a short video about why he loves football and uploaded it online.

“I love football because anything can happen,” Anik said. “You can see a broken tackle, a dive into the endzone or even a one-handed catch.”

The idea seemed like just another after-school activity for the always-energetic Anik. But when he showed the video to his parents, they were surprised at his natural charisma in front of the camera and his depth of knowledge about the sport.

Anik knew he was the real deal when he received praise from his father, an avid sports watcher.

“Anik and I talk football all the time in the house and quiz each other about the players on every team,” his father, Sachin said. “But I was really surprised at how much of a natural he is at being a sportscaster.”

That natural talent now fuels Anik Gupta’s career aspiration. He wants to be on ESPN’s Sportscenter and share analysis and commentary on all things football. His favorite thing is making predictions about the outcomes of games. In fact, it’s his fortune-telling abilities that earned him acclaim when, in 2019, he accurately picked the winner of each game in the NFL Playoffs — including the Patriots’ Super Bowl victory.

“When I predict a game correctly, I just get so happy,” Anik said. “I want to be the best predictor in the league.”

Those predictions got him a feature story on Raleigh Spectrum News 1, then WRAL-TV and even an invite from the Ellen DeGeneres Show. Unfortunately, the Ellen appearance never happened because of COVID-19, but the legacy of Anik Gupta continued to rise.

On his channel, he’s now conducted interviews with the likes of Gov. Roy Cooper, Buffalo Bills running back Nyheim Hines and Carolina Panthers play-by-play announcer Anish Shroff. But you’d be sorely mistaken if you think the status of these big names shook Anik’s confidence.

“I’m a little terrified at first, but then I just sort of calm myself down,” he said.

Anik eases his nerves with breathing exercises or reigniting his passion for the game by playing “Madden” — an NFL video game. 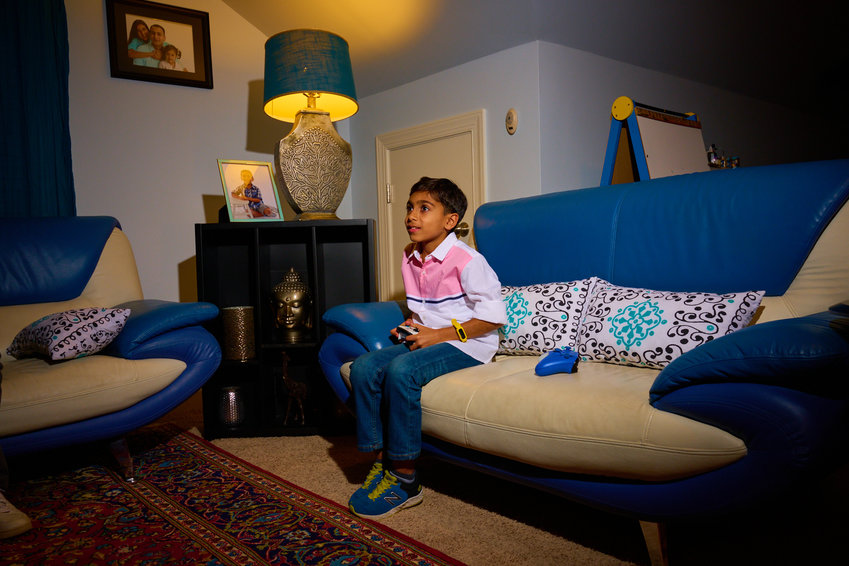 Anik Gupta, 10, plays his Madden video game at his home in Cary. His franchise in the game is the top of the league.

Before a big interview, Anik said he researches his subject and finds niche details about them — favorite teams and players and previous places of work — to make sure he asks the right questions.

It helps that Anik has the support of his family to help his channel continue to improve. His mom, Dr. Radhika Gupta, provides the equipment, edits the videos and books all his interviews with the stars.

“When everything is done and the kids go to sleep at night I sit and do all the contacting, editing, etc.” Dr. Gupta said. “It is quite demanding, but I believe in his passion and I want to support him.”

His mom also runs his channel growth strategy and is attempting to get Lil’ Football Fan to 1,000 subscribers by the end of the year.

Snippets of his videos are also posted to Facebook and Instagram profiles to help increase engagement, which is managed by Parklife Communications. The company also created a website for all of his content: lilfootballfan.com

“We always encourage him to think and take time with these videos,” Dr. Gupta said. “If this is truly what he wants to do then we want him to give the best he can, it’s about more than just shooting a video and uploading.”

His dad Sachin provides the inspiration for the videos. Their conversations revolve around what games to watch for the week and the most recent top performers in the league. Anik’s older sister, Anushka, is also a frequent guest on the show. She’s just as well versed in the game as Anik and is quick to add her own insights about the game into Anik’s videos.

In the Gupta household, football is truly a family affair. The family even keeps its own spreadsheet to predict the outcomes of weekly games; whoever predicts the most games correctly gets to pick the dinners for the week.

For the love of the game

When he isn’t in front of the camera talking football, Anik keeps up his passion for the game in other ways. He is also the commissioner, creator and commentator of the Helmet League — a league where WWE Wrestler action figures wear the helmets of different teams and act out a full football game on Anik’s living room floor. 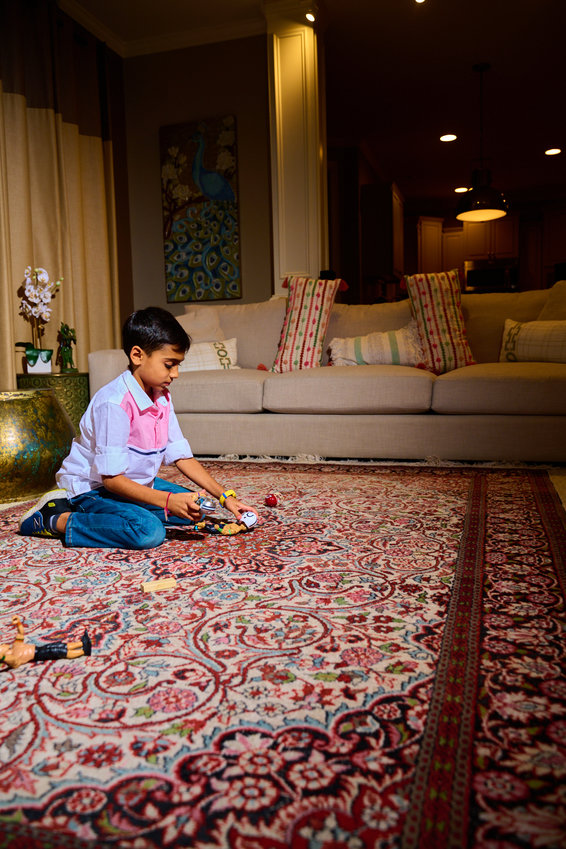 Anik Gupta, 10, plays a matchup in the Helmet League — his created football league where he sets up WWE Wrestling action figures as the players in …

Throw pillows become the goalposts, the red floral rug becomes the 100-yard field and the two wrestlers become quarterbacks, linebackers and everyone else on the 53-man roster. Anik commentates every play, gives the players halftime speeches and even keeps the stats for his league. Currently, the Miami Dolphins and Los Angeles Chargers sit atop the standings in the Helmet League standings. 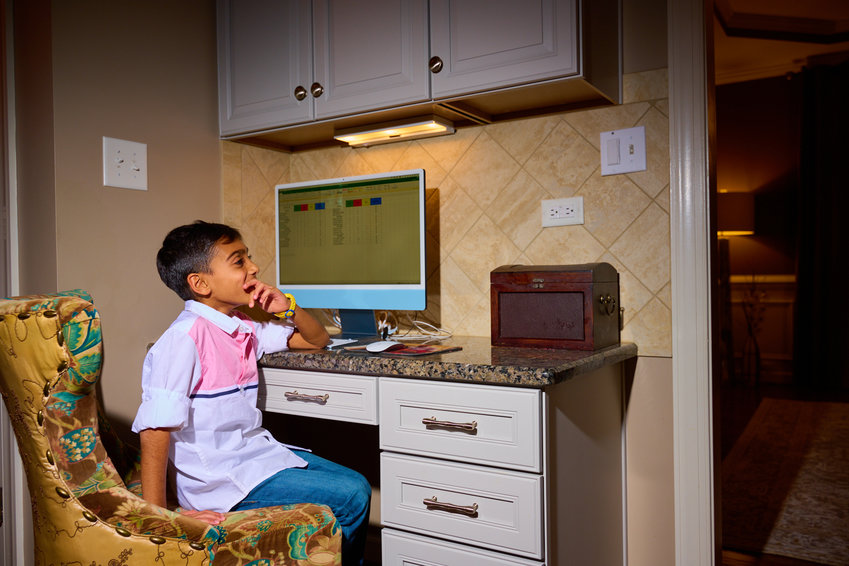 As the commissioner, commentator and creator of the Helmet League, Anik Gupta keeps the stats and scores of every game. The Miami Dolphins currently …

In his spare time, Gupta also plays Fantasy Football, where he’s second in his division, and runs a virtual Madden franchise, where his team is 11-0. Somewhere in between all the football, he finds time to play soccer for North Carolina FC, and attend school as a 4th-grade student at Thales Academy in Apex.

At school, Anik said most of his friends aren’t as fanatical about football as he is, so he sees the game as a sort of private passion to get excited about, and his YouTube channel — www.youtube.com/@LilFootballFan — is a way to share that passion beyond his social circles.

Anik said he’ll continue to provide weekly predictions and analysis on his Lil’ Football Fan channel as the season winds down. As for those predictions, he said he thinks the Super Bowl will feature a battle of the birds between the Baltimore Ravens and Philadelphia Eagles.

Correction: A previous version of this story indicated that Dr. Radhika Gupta runs the social media and websites for Lil' Football Fan. Those duties are run by a communications company: Parklife Communications. The News + Record apologizes for this error.