A poster hung up on the wall during a "culturally responsive teacher" training that took place in Chatham County Schools. These trainings have recently sparked rumors that CCS is teaching critical race theory in the schools.
Photo courtesy of Malinda Quinn
Posted Wednesday, September 21, 2022 10:08 am
Updated: Wednesday, September 21, 2022 3:53 pm

We don’t have time to politicize our classrooms but outside people are doing that for us.”
Edward Walgate, Northwood High School teacher
BY BEN RAPPAPORT
News + Record Staff

A collection of documents from a recent training program for teachers and administrators in Chatham County Schools recently made the rounds on social media.

The training, held last month, was meant to help teachers understand equity and race as part of improving inclusivity efforts in the classroom — but instead it sparked claims that CCS is teaching CRT, or Critical Race Theory, to students.

A selection of documents, published in an opinion piece on the online “Chatham Journal,” on Sept. 1 showed outlines of diversity training materials. The article, which purported to illustrate how the system was engaged in CRT teaching, quickly drew outrage from some parents and community members who lambasted CCS administration and board members. 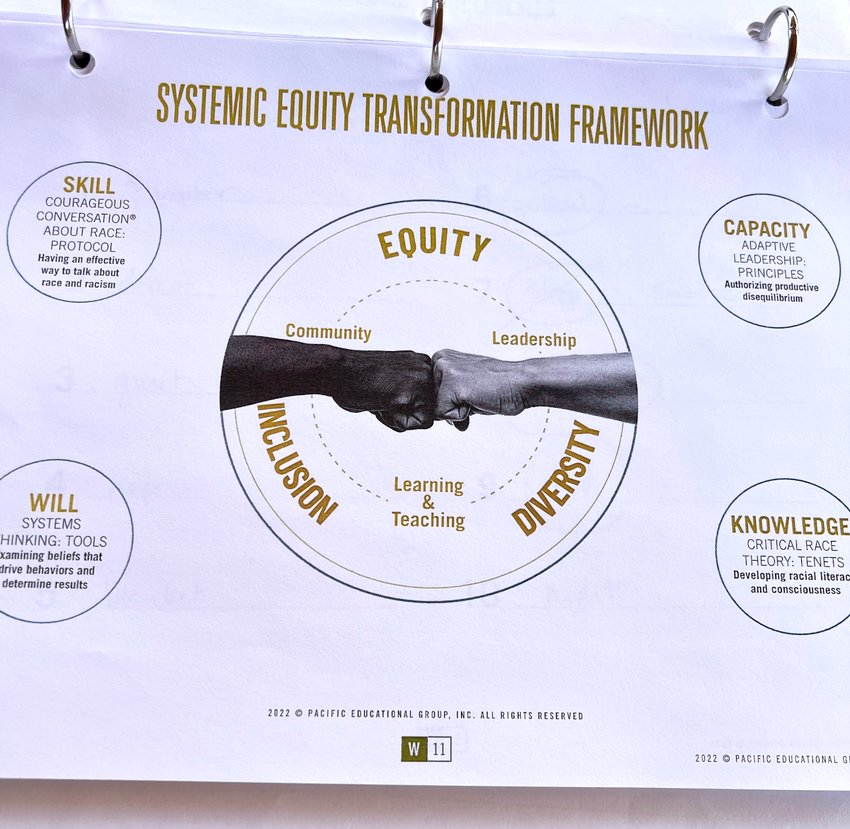 Documents from a diversity training for Chatham County Schools administrators were published an opinion piece in the "Chatham Journal" on Sept. 1. …

Critical Race Theory is an academic framework taught at undergraduate and graduate levels that examines the social construction of race and how racism is embedded into legal and social systems. In recent years, it’s been increasingly brought into public debate with regard to K-12 schools. It’s not uncommon, though, for mandated or voluntary equity and social justice training for administrators and staff to be interpreted by some unfamiliar with CRT as CRT training or CRT indoctrination.

But CCS officials say that interpretation doesn’t make it a reality, particularly in regard to K-12 classroom instruction.

CCS teachers told the News + Record that looking at the documents, it’s hard to see these trainings as problematic or out of the ordinary. The outlines discuss helping teachers identify white privilege, understand unconscious bias and point out the ways race and class play systemic roles in determining educational outcomes.

CCS teachers who participated in the training, entitled “Culturally Respectful Teaching,” also said they were confused and concerned about the outrage from some community members they saw online. One, Edward Walgate, a science teacher at Northwood High School, is president of the Chatham County Association of Educators.

“Critical race theory is a completely manufactured issue,” Walgate said. “The idea that graduate level theory is being taught in our public schools ... I think people are doing that for political gain.”

He said it’s disappointing that politicians and some parents have worked to persuade others to distrust public schools through systemic underfunding and disrespect. Walgate said teachers are already underfunded and overburdened, so they don’t have the time to indoctrinate students with liberal ideologies.

“We don’t have time to politicize our classrooms,” he said. “But outside people are doing that for us.”

The training itself, he said, while informative, was nothing outside of standard procedure. What it actually involved was a speaker from EduConsulting firm, which provides professional development for teachers across N.C. through “researched-based solutions.”

“They walked us through some thought experiments to reflect upon our backgrounds and preheld stereotypes,” Walgate said. “I think it was a very healthy thing for the body of teachers in CCS to be reminded of. Unfortunately, the teachers aren’t as diverse as our student population, so its important to remember our students come from very different backgrounds from us.”

He said this kind of training about cultural awareness and unconscious bias is standard practice for most who graduate college with a degree in education.

Malinda Quinn, a 6th grade social studies teacher at Margaret B. Pollard Middle School, also participated in the training sessions. She’s been a teacher in CCS for 30 years and said equity training is nothing new — it just evolves over time.

“What we’ve always talked about is that we can’t reach our students if we don’t understand where they come from,” Quinn said. “We are trying to give our students representation so that they see a bit of themselves in something that we’re teaching.”

She said as a history teacher, she’s obligated to not share just one portion of history, but rather try to share global perspectives. She said being culturally responsive means making the curriculum relatable for all students.

“You can’t teach the Civil War without teaching slave narratives, it’s an uncomfortable truth,” Quinn said. “But you can’t cover up one truth to make another person feel safe. We have to know where we came from to answer the questions of the present.”

Incidents like last year’s J.S. Waters School “mock slave auction,” where Black middle school students were targeted by their white classmates, are a reminder of why diversity, equity and inclusion need to be at the forefront of educators’ minds, Walgate said.

“A good steady drip of reminding teachers about certain issues is good,” Walgate said. “A lot of teachers are really busy, and its easy for certain things to get pushed down the to-do list. It’s healthy to periodically be reminded of what’s really important.”

“Following last year’s incident at J.S. Waters, we realized not all of our staff knew how to have conversations around racial issues and we wanted to make sure we were prepared for those conversations moving forward,” said CCS Public Information Officer Nancy Wykle.

Wykle said the trainings better-equipped district employees to have conversations about race. She also said the district has received positive feedback from the administrators who participated.

Gary Leonard, chairman of the CCS Board of Education, also previously told the News + Record, “We’re not teaching CRT. In particular, we’re trying to make sure we take care of each individual child socially and emotionally.”

Rumblings of critical race theory in Chatham County Schools first came about amid debates over masking in schools, according to Walgate and other teachers who spoke to the News + Record. He believes that some parents and community members in the district began to gain political traction from those masking debates as the school district returned to in-person learning and leveraged that traction to fight for this new issue of CRT.

The narrative of CRT “indoctrinating” CCS students and the idea that the school system is engaging in “social experiments” through these types of trainings boiled over at last week’s board of education meeting.

A group of frustrated parents, Republican candidates for office and several people from outside the district spoke at the board meeting after reports surfaced online last week of a student at Bonlee School being “bullied” by a teacher because of her love for the Bible.

While the main reason many showed up to the meeting was the situation at Bonlee, many speakers during the public comment portion of the meeting used their time to touch on ideas related to CRT.

John Amanchukwu from Raleigh — a Black pastor who describes himself as “a rising voice exposing the racist ideologies of abortion and Critical Race Theory” — spoke at the meeting, saying public school systems and Chatham County Schools teach Critical Race Theory, transgenderism and grooming policies, which he called “tragic ideologies.”

Another out-of-town pastor, Allen Mashburn — who co-hosts the “Carolina Conservatives” podcast and preaches in Seagrove — also spoke at the meeting. He equated the diversity and equity trainings to bullying and harassment. Mashburn also misstated that these equity trainings had been going on for two weeks; records show they lasted no more than two and a half hours on one day.

Walgate was also in attendance at the meeting, but did not speak. He said he believed it was troubling that people from outside Chatham County would attend a school board meeting where they don’t know what happened inside the classroom and speak to conservative parents’ fears in hopes of gaining political points or additional followers for their podcasts.

“It seems like a handful of people were exploiting the situation for their own gain,” Walgate said. “I find it disappointing — although I like to think its a minority of people out there — who believe that teachers and the school system are indoctrinating students.”

Quinn, the 6th-grade teacher, wasn’t at the meeting. But she’s seen the comments on social media posts from parents and community members about the idea of CRT in CCS.

“When I see people make these comments, it’s like, ‘You just don’t get my world,’” she said. “I’m the expert, but I also always feel in the long run that parents do have the rights they’re asking for.”

The social studies teacher said she believed politicians are making public schools into political pawns that heighten concerns and strike at fears.

“I don’t think they’d want me to come home and tell them how to parent,” Quinn said. “And while I value their opinions, I don’t think parents that they always have the degree to understand why I’m selecting the material I’m selecting … to not be trusted is really difficult.”

The district affirms it is not teaching CRT in schools and does not believe these equity trainings played a role in changing class procedures or outcomes. There have been no mandated changes to the classroom as a result of the “Culturally Respectful Teacher” trainings.