The 76-year-old says she enjoys the crafts, activities and food the center provides her. But like many of her friends at the center, Dalton isn’t able to drive herself.

Instead, she relies on Chatham Transit. The on-demand shuttle service comes to her front door, picks her up and takes her home from the senior center — something she’s enjoyed since she joined the center more than 20 years ago in 2001.

“It’s like a family, they really care for you,” Dalton said. “The drivers are good, always on time and helpful.”

Dalton and her senior center friends are members of the Chatham County Council on Aging. In 2021, COA members made up 17% of Chatham Transit ridership and in 2019 they made up 23%. That makes COA one of the largest blocs of Chatham Transit’s operation, behind only general public rides, which account for 35% of trips.

That percentage may soon increase since the Council on Aging recently reopened its senior center in Pittsboro following a series of renovations. On Aug. 1, COA also announced it is operating both centers five days a week for the first time since the COVID-19 pandemic began.

Barbara Woody, who oversees transportation for the COA as its integrated services manager, said there are about 20 residents at each center utilizing Chatham Transit each day. The transition back to a five day schedule has been difficult for her.

“We spent from April until August coordinating between the clients and Chatham Transit,” Woody said. “Getting the clients to confirm what days they want to come has been the hardest part. They may tell you a certain schedule the first week of April, but last week they changed their minds.”

Despite the scheduling difficulties, Woody said they could not have made the operational increases without the flexibility of Chatham Transit.

Each route is made up of about six to eight clients, according to Woody. She then coordinates with Chatham Transit to ensure availability of shuttles and drivers. If the transportation service is unavailable, then clients are placed on a wait list and must be driven to the center by friends or family — Woody said the current waitlist is just two clients.

Chatham Transit also said it was prepared for the service shift. Anna Testerman, its executive director, said she hired additional drivers in anticipation of the increased need.

“COA opening both centers is not placing a burden on our organization,” Testerman said. “It was something we were prepared for.”

She said the organization is fully staffed and still has applications coming in for driving positions. This success comes despite bus driver shortages in Chatham County Schools and nearby Chapel Hill Transit.

At COA and beyond, Chatham Transit is going to need to continue to grow along with the county. Development, job opportunities and population booms have become seemingly inevitable in Chatham County, but not all of that population is going to have access to personal vehicles.

Testerman said Chatham Transit is preparing for growth. She attends regular meetings with the developers of Chatham Park and discusses potential collaboration opportunities.

“It all kind of boils back down to figuring that need out,” Testerman said. “What is going to be the need when these clients come in.”

For example, transportation planning for employment looks different than planning for recreation, Testerman said. Figuring out how to serve new VinFast employees, for example, differs from carrying people from one place to another inside Chatham Park.

The transit director added she’s exploring including a fixed bus route inside Chatham Park and including weekend service within Pittsboro.

“We’re planning for the eventuality,” Testerman said. “One of the most frustrating things is looking at these developments, and there’s nowhere for my buses to go. So, we’re trying to ensure these developers keep that in mind going forward.”

The need for transportation equity

According to the 2021 Chatham County Community Assessment, 94.8% of residents say they usually take a car or truck to get to work, school or shop for groceries. Meanwhile, 5.7% said they get rides from family or friends and 3.5% said they walk.

This may become an inflection point of future growth, with many Chatham residents already reporting above-average commute times. The average travel time to work for residents is 29.8 minutes with 10.4% of commuters taking 60 minutes to travel to work.

Yet, the data shows Chatham County is still heavily car-dependent, which is disproportionately harming low-income and minority communities.

“Poor transportation decisions can harm health and are not always fair across all communities,” the American Public Health Association reports. “Communities near a highway or major roadway are often low-income and communities of color.”

While these demographic groups make up the largest portion of riders, they also report significant issues in getting adequate service. Twenty-two percent of Hispanic adults reported lack of knowledge about using Chatham’s public transportation was a barrier in the past year.

These same populations — Black and Hispanic adults — are also shown to have proportionally lower incomes to the county average. The average income in Chatham County is $69,799. For Hispanic adults, however, it’s $50,461 — and $41,498 for Black adults. This means the median household income for white residents is 1.6 to 2.7 times higher than other demographic groups in the county. 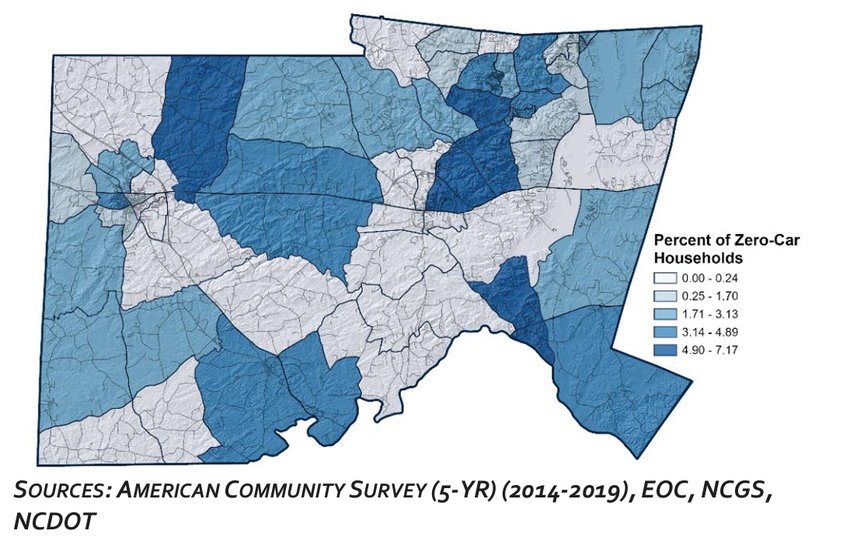 Chatham County has a relatively high number of zero-car households.

For more information about the state of transportation in Chatham County, read the 2021 Community Health Assessment at www.chathamcountync.gov/healthreports. And to learn more about Chatham Transit such as viewing available services and making a future ridership reservation visit www.chathamtransit.org.